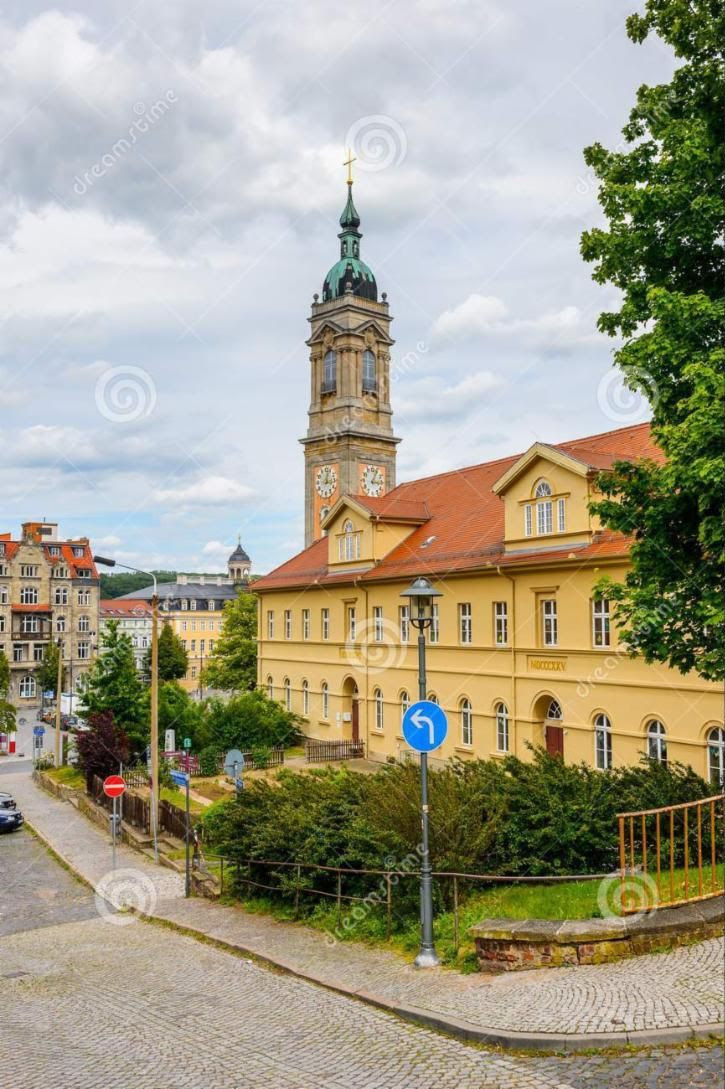 Johann Sebastian Bach was born in Eisenbach, Germany, on MARCH 21, 1685, the youngest of eight children.
He had three siblings die, then in 1694, his mother died.
Eight months later his father died.
Christened at St. George’s Church, he attended St. George's Parochial Latin School, where he sang in the choir, just as Martin Luther had over a century earlier.

In 1521, 37-year-old Martin Luther, on his way to hiding after the Edit of Worms, stopped to preach in St. George's Church before being sequestered in the nearby Wartburg Castle. 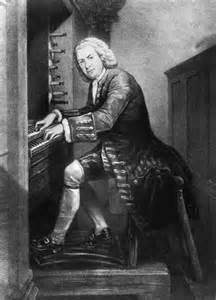 The orphaned 10-year-old Bach moved in with his older brother, Johann Christoph Bach, who was the organist at St. Michael's Church in Ohrdruf, Saxe-Gotha-Altenburg.
Johann Sebastian Bach sang in the choir, in addition to playing the organ and harpsichord.
At 18, he became a church organist, then held positions in several cities and royal courts. 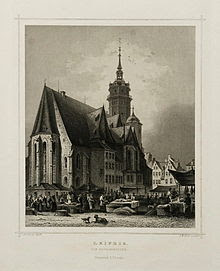 While serving as cantor at Thomas Church of Leipzig, Bach taught Martin Luther's Small Catechism.
In 1717, Bach was imprisoned for a month in Wemiar because he fell out of favor with the Duke, who did not want him employed elsewhere.
He was then employed by Prince Leopold of Anhalt-Köthen to be director of music.
The prince was Calvinist and did not use elaborate music in worship, so much of Bach composing during this time was secular court music, including orchestral suites, cello suites, sonatas and partitas for solo violin, cantatas, and formal dance music. 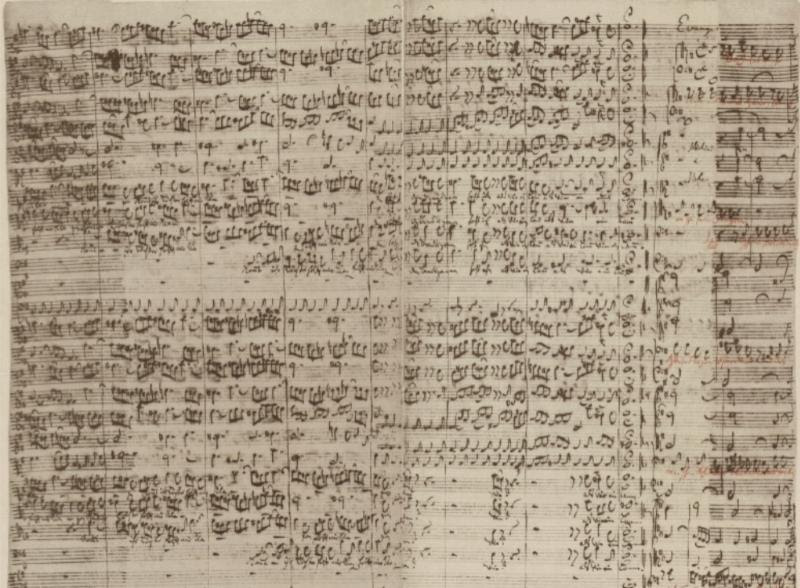 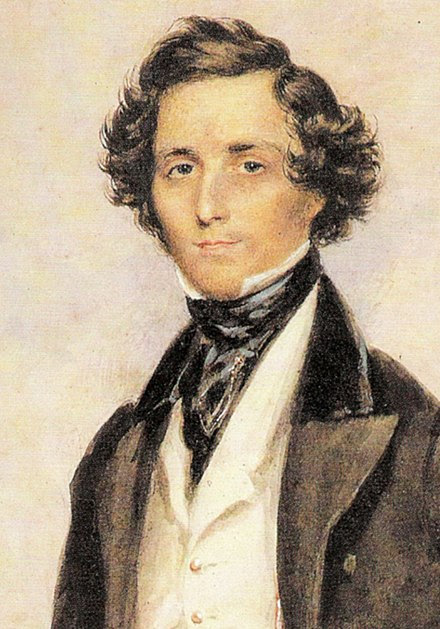 Bach's "Saint Matthew Passion" was performed in 1829 in Berlin by 20-year-old Felix Mendelssohn, the grandson of the famous Jewish philosopher Moses Mendelssohn. 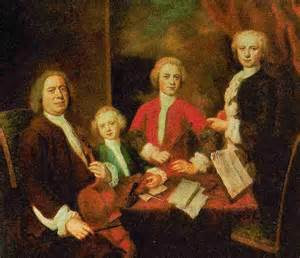 Widowed with 7 children, he remarried and had 13 more.
Considered the "master of masters," Johann Sebastian Bach's works not only exhibit mastery of musical composition, but also reveal his devout relationship with God. 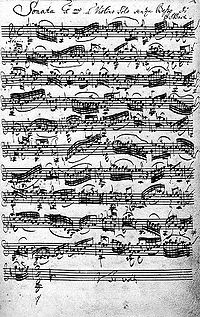 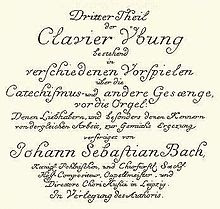 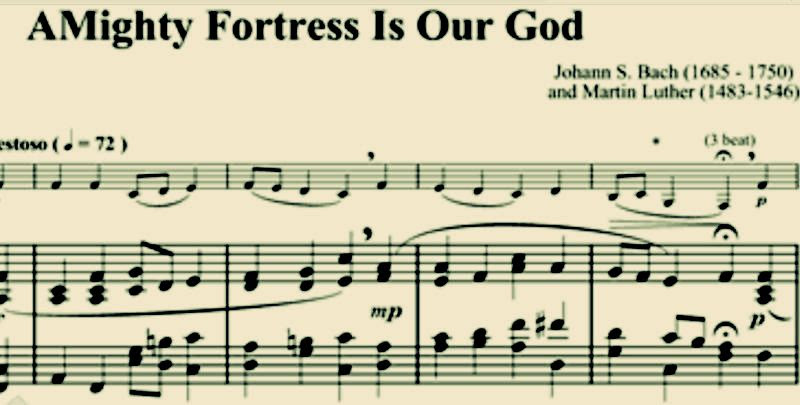 In the 1730s-1740s, Bach wrote two versions of a magnificent thirty-minute cantata, with four-voice choral and instrumental harmonization of Martin Luther's most famous hymn "Ein feste Burg ist unser Gott" (A mighty fortress is our God):
A mighty fortress is our God,
A bulwark never failing:
Our helper He, amid the flood
Of mortal ills prevailing.
For still our ancient foe
Doth seek to work his woe;
His craft and power are great,
And armed with cruel hate,
On earth is not his equal.﻿ 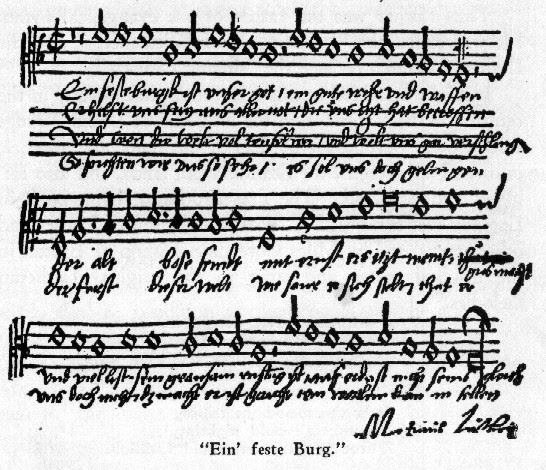 Did we in our own strength confide,
Our striving would be losing;
Were not the right Man on our side,
The Man of God's own choosing.
Dost ask who that may be?
Christ Jesus, it is he;
Lord Sabaoth is his name,
From age to age the same,
And He must win the battle. 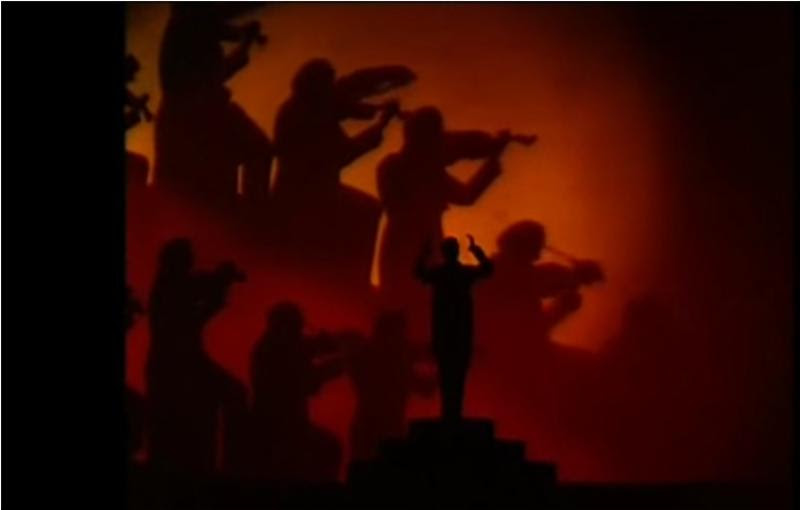 One of Bach's orchestrations, Tocata y Fuga, was used in the opening of Walt Disney's movie Fantasia. 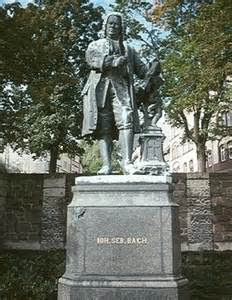 In "The Story of Mankind," 1921, Hendrik Willem van Loon wrote:
"By the middle of the 18th century the musical life of Europe was in full swing.
Then there came forward a man who was greater than all others, a simple organist of the St. Thomas Church of Leipzig, by the name of Johann Sebastian Bach ... 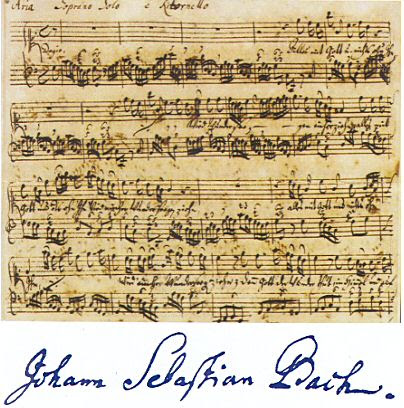 ... In his compositions for every known instrument ... to the most stately of sacred hymns and oratorios, he laid the foundation for all our modern music.
When he died in the year 1750, he was succeeded musically by Mozart, then Ludwig van Beethoven."

Bach's library was catalogued after his death.
Prominent on the list of books was "Calovii Schriften," a three-volume Bible with commentary notes written by Lutheran theologian Abraham Calovius. 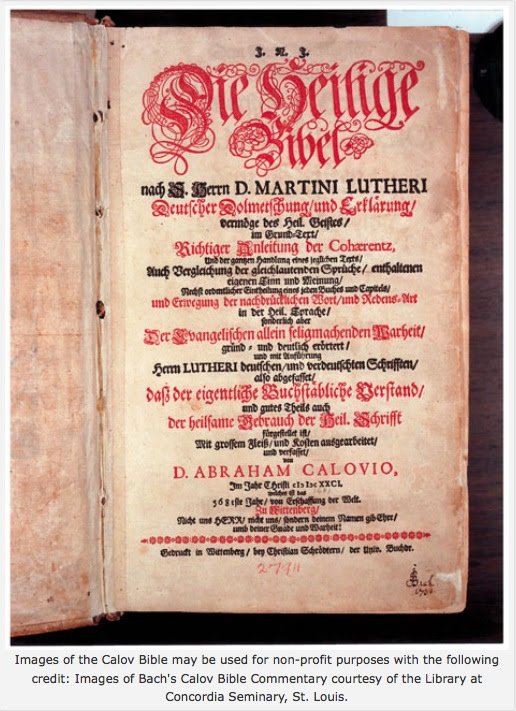 Bach's "Calovi Schriften" Bible came with German immigrants to Philadelphia, where it was purchased in the 1830s by the Reichle family, who moved to Frankenmuth, Michigan.
In June of 1934, the Missouri Synod of the American Lutheran Church held a meeting in Frankenmuth, Michigan.
Attending was Lutheran minister Rev. Christian G. Riedel. 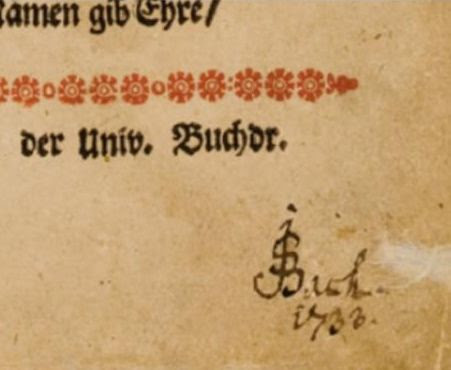 He stayed at the farmhouse of his cousin, Leonard Reichle, who showed him a volume of the Bible.
Rev. Riedel immediately noticed Bach's signature, and they searched and found the two other volumes in his attic.
Leonard Reichle donated them to Concordia Seminary Library in St. Louis, Missouri, in October 1938. 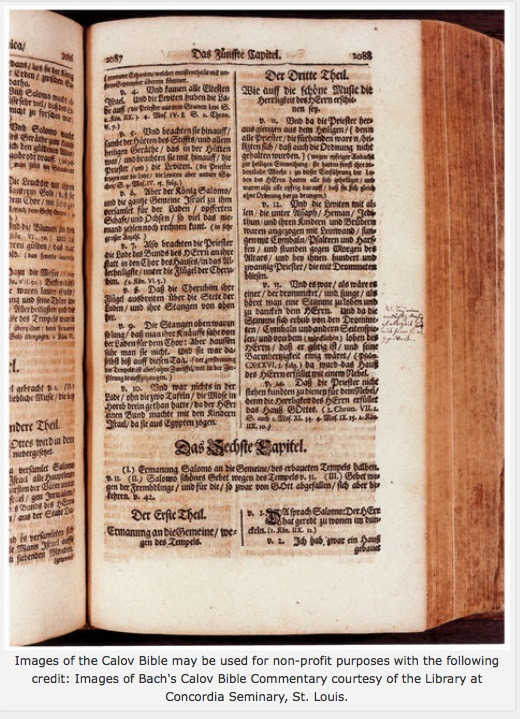 The Bible contains hundreds of underlines and margin notes in Bach's handwriting.
Albert Clement wrote:
"The depth of Bach's Luther-study can be proved on the basis of this source, e.g. in his treatment of Gen. 3 (the Fall). Calov quotes Luther extensively, especially regarding Gen. 3:7, a key verse for the doctrine of original sin. Calov, however, shortens Luther's comment with a sentence; Bach carefully writes down the missing words in the margin."

Dr. Thomas R. Rossin wrote his doctoral dissertation on the over 400 of notes Bach made in his "Calovi Schriften" Bible.
Dr. Rossin wrote:
"Only three percent of the markings relate to music, and there's only one reference to a specific piece of music.
Otherwise we learn about the man Bach, his personality, and that he really was believing what he was writing, that his music was not just a reflection of his job ...
He was employed by the church to write church music, so of course he was going to write that (he was an orthodox Lutheran.)
But now we have proof - things that Bach wrote in there point directly to his personal faith. He wrote for his own edification, not for anyone else to read ...
No longer can we have purely academic performances where all the notes are lined up right and the phrases are beautiful and it's done musically.
It has to be more than that. One must understand the theology in order to perform the music well."

One of Bach's notes was:
"In devotional music, God is always present with His grace."
Near First Chronicles, chapter 25, he wrote:
"This chapter is the true foundation of all God-pleasing church music." 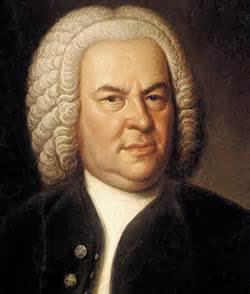 Johann Sebastian Bach had stated:
"The aim and final end of all music should be none other than the glory of God and the refreshment of the soul.
If heed is not paid to this, it is not true music but a diabolical bawling and twanging." 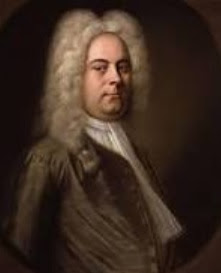 Johann Sebastian Bach and composer George Frideric Handel were born the same year, 1685.
They lived just 80 miles from each other but never met, though once, in 1719, Bach traveled to meet him not knowing Handel had gone on a trip. 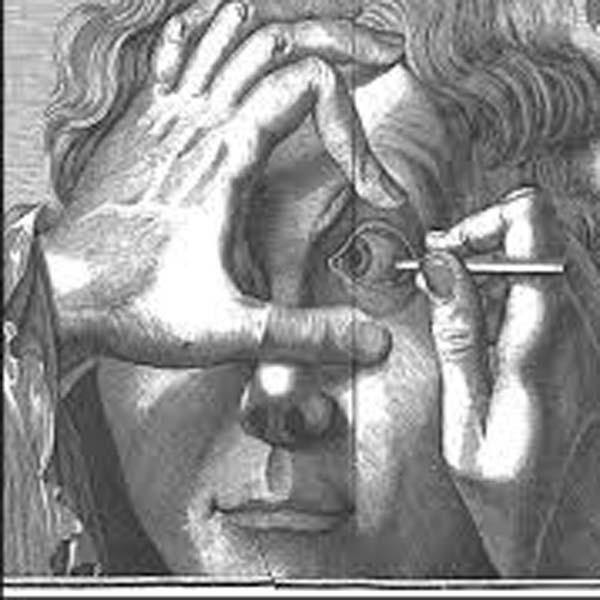 By 1750, Bach was suffering from cataracts.
He agreed to let a questionable "surgeon," Chevalier John Taylor, perform a crude eye-surgery, which left him blind and infected.
He died three months later at the age of 65. 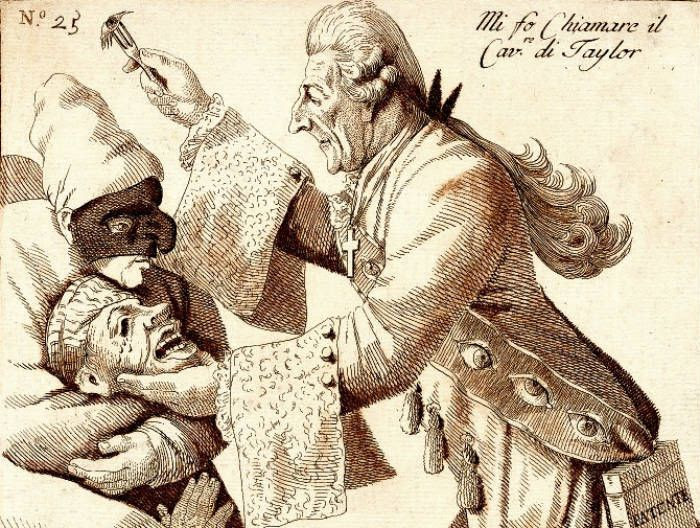 Tragically, the same "surgeon" persuaded composer George Frederick Handel to let him attempt the same surgery, which, unfortunately, left him blind as well. 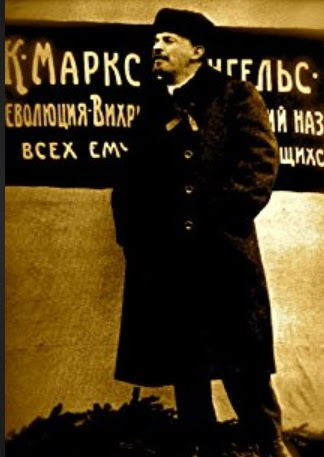 Soviet writer Maxim Gorky wrote in "V.I.Lenin" (1924) of one evening in Moscow, at a performance of Beethoven's "Appassionata" Sonata, Opus 57, played by pianist Isai Dobrovein.
Afterwards, socialist leader Vladimir Lenin remarked to hostess E.P. Peshkovaia:
"But I cannot listen to music too often, it affects one's nerves, makes one want to say kind, stupid things and stroke the heads of those who, living in such a foul hell, can create such beauty.
Nowadays if one strokes someone's head, he'll get his hand bitten off! Better to beat the person unmercifully over the head, although ideally we oppose the use of force in human relations. Hm, hm, our task is infernally hard!" 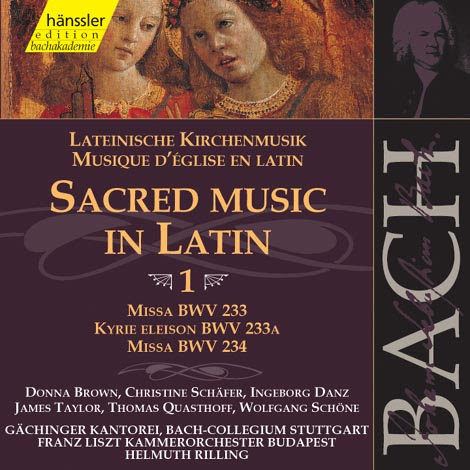 Supreme Court Justice Robert Jackson wrote in McCollum v. Board of Education, 1948:
"It would not seem practical to teach either practice or appreciation of the arts if we are to forbid exposure of youth to any religious influences. Music without sacred music would be incomplete, even from a secular point of view." 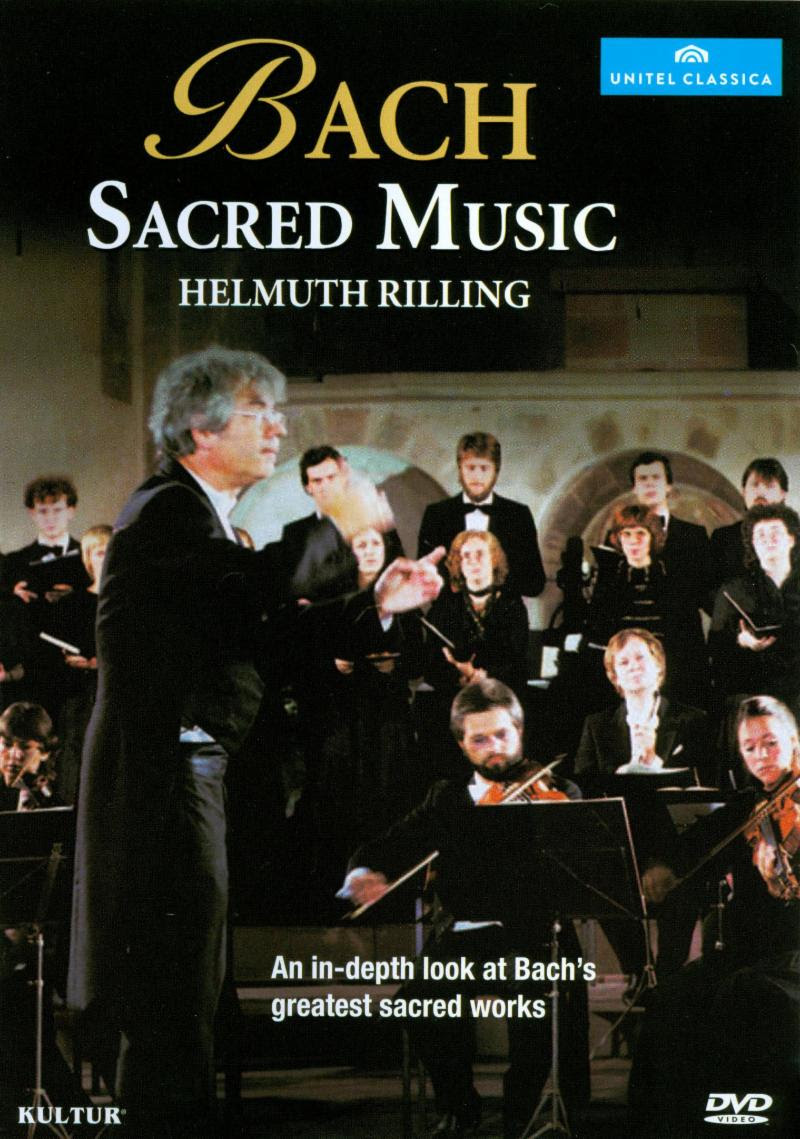 U.S. District Court Eastern District of Tennessee wrote in the case of Wiley v. Franklin (1979):
"The Bible is replete with writings relevant to such secular subjects and interests as history, both ancient and modern, literature, poetry, music ... activities encompassed within the generalized phrase 'Western Civilization.'
To ignore the role of the Bible in the vast area of secular subjects such as herein above referred to is to ignore a keystone in the building of an arch, at least in so far as Western history, values and culture are concerned." 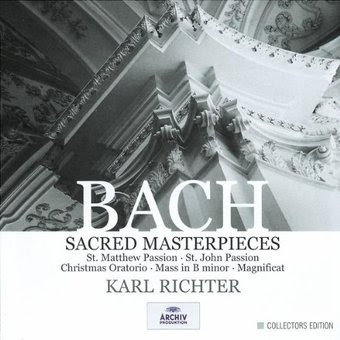 U.S. Court of Appeals-8th Circuit, in the case of Florey v. Sioux Falls School District, (1980) stated:
"Opportunity for students to perform a full range of music, poetry, and drama that is likely to be of interest to the students and their audience .. advanc(es) the student's knowledge and appreciation of the role that our religious heritage has played in the social, cultural and historical development of civilization." 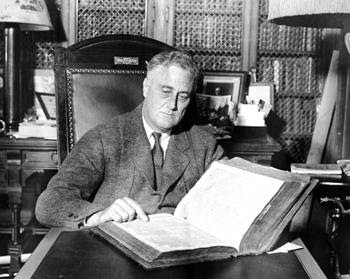 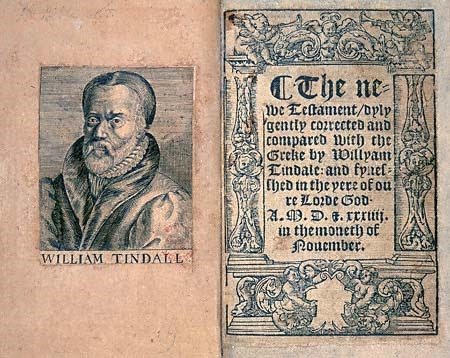 ... The part that William Tyndale played in this English translation is generally acknowledged by the historian ... The work they did marks the beginning of one of the great epochs in the history of English-speaking peoples.
It would be difficult to appraise the far-reaching influence of this work and subsequent translations upon the speech, literature, moral and religious character of our people and their institutions ...
To it may be traced the richest and best we have in our literature. Poetry, prose, painting, music and oratory have had in it their guide and inspiration." 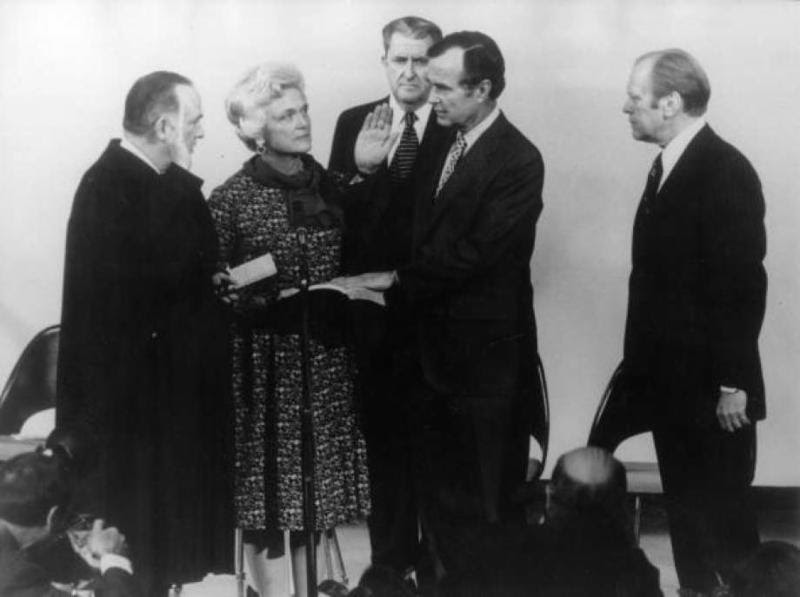 On February 22, 1990, President George H.W. Bush stated in his Proclamation declaring 1990 the International Year of Bible Reading:
"The Bible has had a critical impact upon the development of Western civilization. Western literature, art, and music are filled with images and ideas that can be traced to its pages."
--
American Minute is a registered trademark of William J. Federer. Permission is granted to forward, reprint, or duplicate, with acknowledgment. (wjfederer@gmail.com 314-502-8924)
Fair Use Disclaimer (17 U.S. Code § 107): The above work is provided for not-for-profit educational purposes, free of charge, add free, and noncommercial. All images, text, excerpts and quotations included therein are for the purposes of teaching, scholarship, research, criticism, comment, and news reporting.