Bartolome' de Las Casas left Spain in 1502 for the Caribbean, which was called the West Indies, where he became a hacendado of an encomienda (plantation) and a slave owner of native Americans. 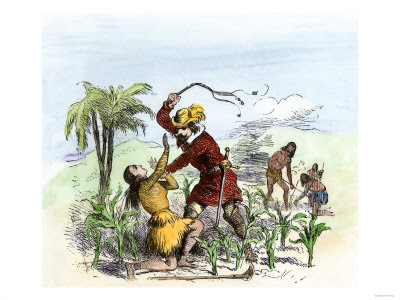 He participated in slave raids and military expeditions against the native populations of Hispaniola and Cuba. 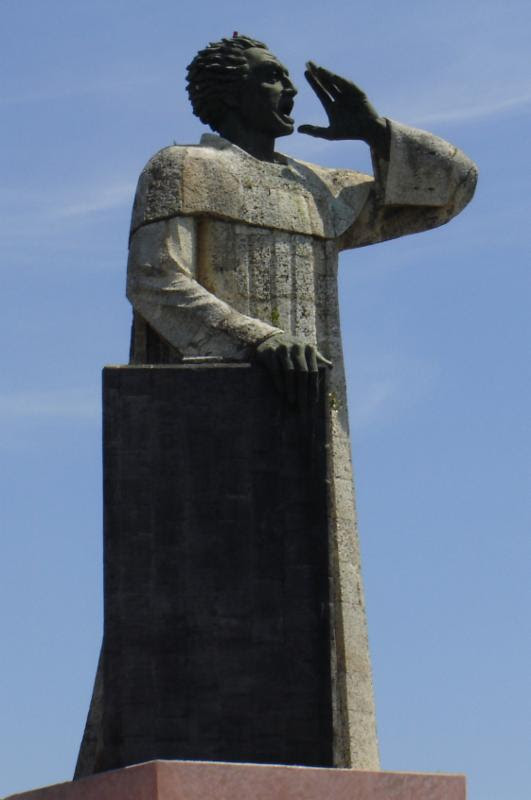 But in 1511, six years before Martin Luther started the Reformation, the life of Bartolome' de Las Casas underwent a systemic change.
He heard a church leader, Dominican friar Antonio de Montesinos, speak:
"I am a voice crying in the wilderness ... the voice of Christ in the desert of this island ... You are all in mortal sin ... on account of the cruelty and tyranny with which you use these innocent people.
Are these not men? Have they not rational souls? Must not you love them as you love yourselves? ..." 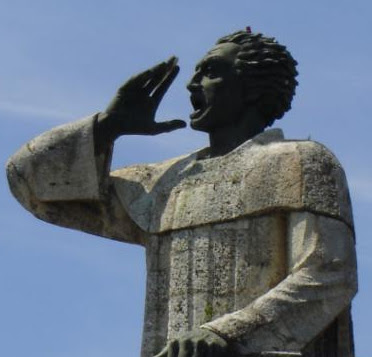 Montesinos continued:
"Tell me by what right of justice do you hold these Indians in such a cruel and horrible servitude? ...
Why do you keep them so oppressed and exhausted ... from the excessive labor you give them ... in order to extract and acquire gold every day." 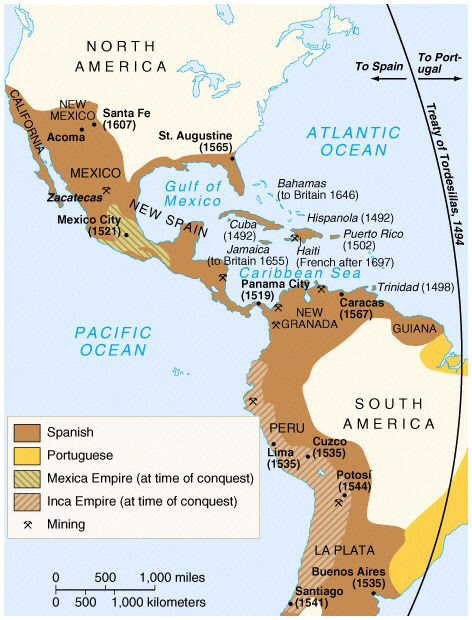 Bartolome' de Las Casas was convicted in his heart by Motesino's preaching and, in a dramatic turn, determined to follow Jesus, leading him to be the first priest ordained in the New World.
Motesino's preaching sounded to similar to Martin Luther King, Jr., who centuries later would state:
"The church must be reminded that it is ... the conscience of the state ... It must be the guide and the critic of the state ...
If the church does not recapture its prophetic zeal, it will become an irrelevant social club without moral or spiritual authority."
Similarly, John Jay, the First Chief Justice of the U.S. Supreme Court, wrote January 1, 1813:
“It is the right and duty of our pastors to press the observance of all moral and religious duties.” 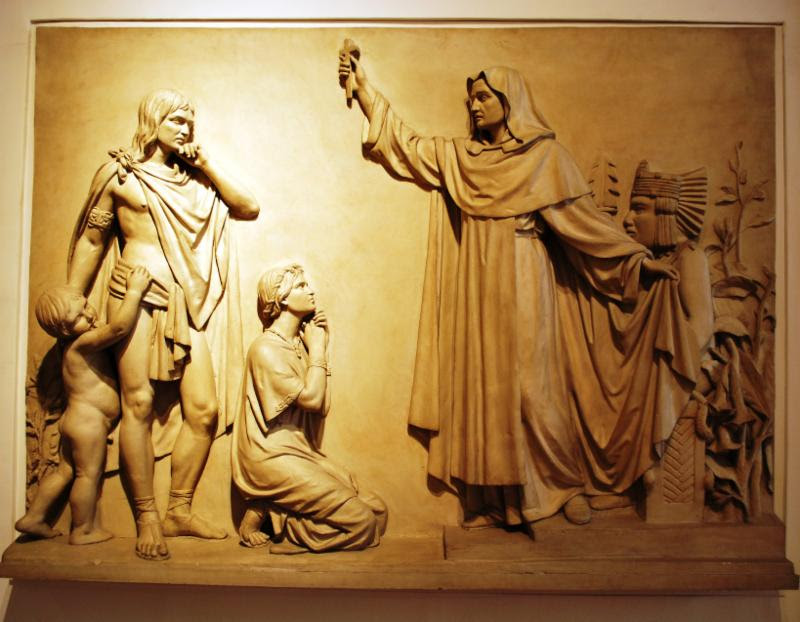 In 1514, while preparing a Pentecost Sunday sermon, Las Casas read from the Book of Ecclesiasticus (Sirach) 34:18-22, that if one offers as a sacrifice an animal that they have obtained dishonestly, it is unacceptable, and it is as murder to deprive someone of his means of making a living. 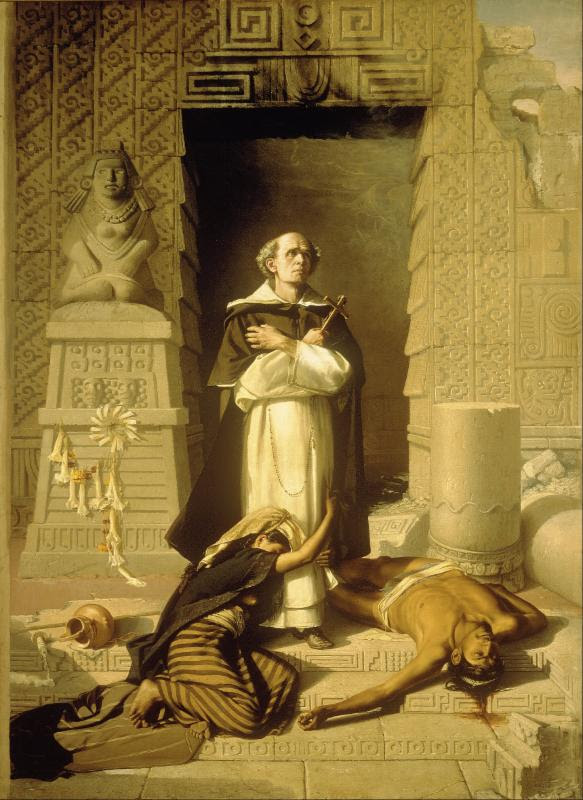 Bartolome' de Las Casas then dedicated the rest of his life to ending the enslavement of native Americans.
He became Bishop of Chiapas and was officially appointed "Protector of the Indians." 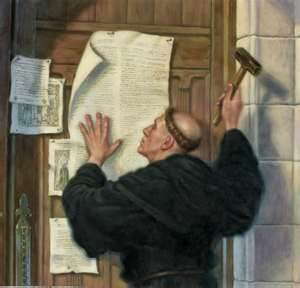 In 1515, two years before Martin Luther started the Reformation, Las Casas and Montesinos went back to Spain where they met with King Ferdinand on Christmas Eve. 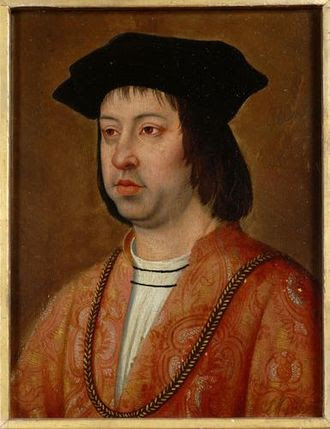 King Ferdinand agreed with their cause to end the enslavement of native Americans, but, unfortunately, he died a month later before doing anything about it. 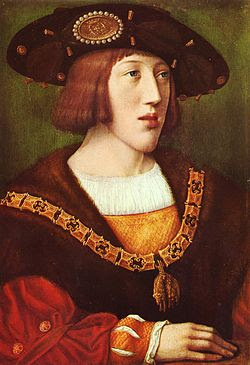 Las Casas, being now 40-years-old, petitioned the new 16-year-old King Charles V to end the military conquest of the new world and use peaceful means to convert Indians. 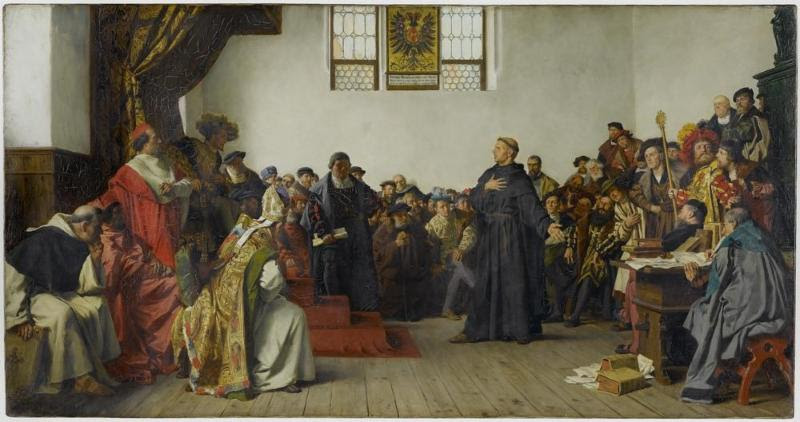 This was the same King Charles V who in 1521 presided over the Diet of Worms and the proceedings against Martin Luther. 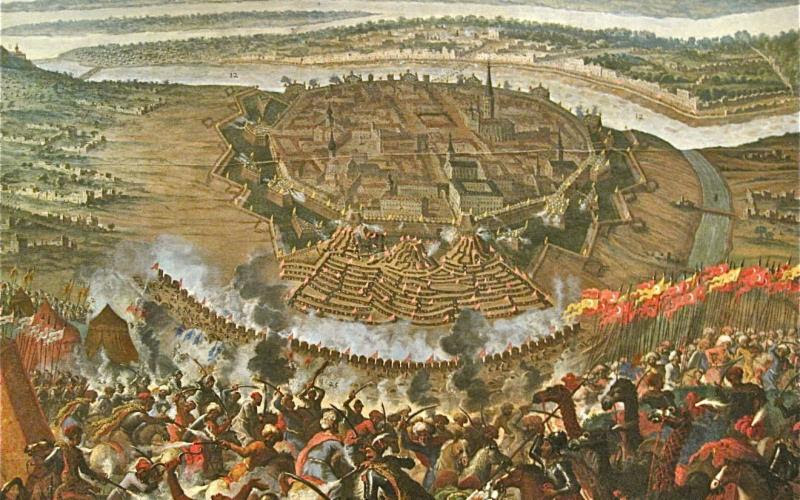 King Charles V also defended Europe against the jihadist Muslim warriors of of Turkish Sultan Suleiman the Magnificent, who invaded Hungary in 1526 and Austria in 1529. 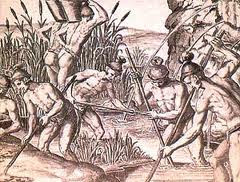 In 1531, on Tepeyac Hill outside of the former Aztec capitol of Mexico City, word spread of Indian Juan Diego and "The Virgin of Guadalupe" which resulted in an estimate 15 million Indians being baptized in the next 20 years in what many consider the largest mass conversion in history.

In 1536, Las Casas criticized Franciscan friar Motolinia for being too quick to baptize thousands of Indians before they were fully instructed in the faith.

Las Casas wrote a treatise, titled: "Concerning the Only Way of Drawing All Peoples to the True Religion."
Las Casas became hated by those without a conscience who profited off of the slavery of Indians. 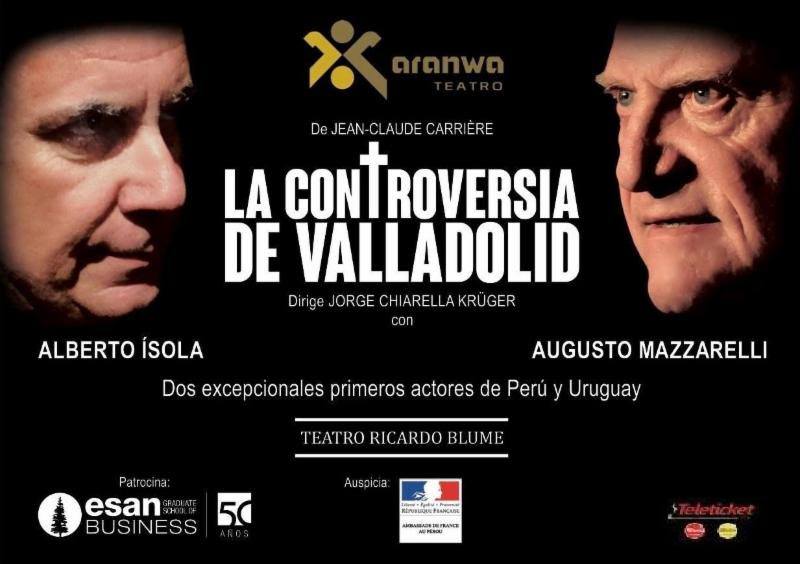 Similar to the pro-life versus pro-abortion arguments of today, Las Casas debated Juan Ginés de Sepúlveda in 1550 at Valladolid. 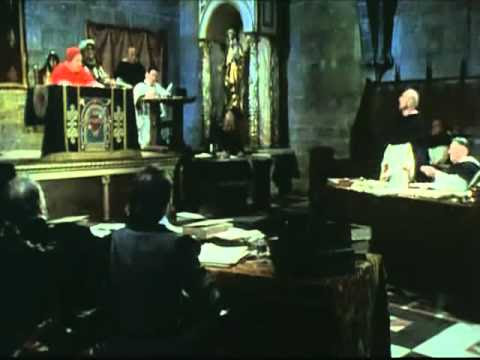 Sepúlveda argued that Indians were less than human and therefore it was justified to enslave them.
Las Casas, on the other hand, defended the Indians, explaining that all lives matter, irregardless of race. That Indians were fully human, created in the image of God, and therefore should never be enslaved. 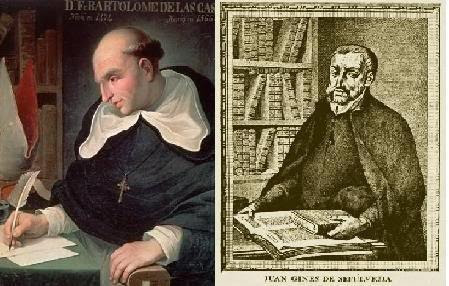 This conflict demonstrated the continual tension between the two threads that run through human history: GREED and the GOSPEL. 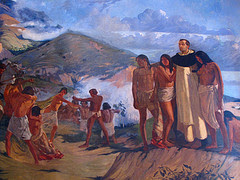 People motivated by the GOSPEL: 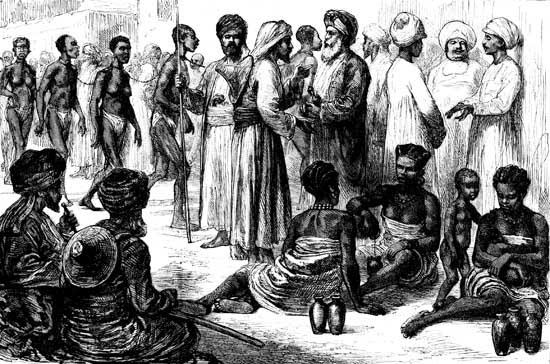 Those motivated by GREED: 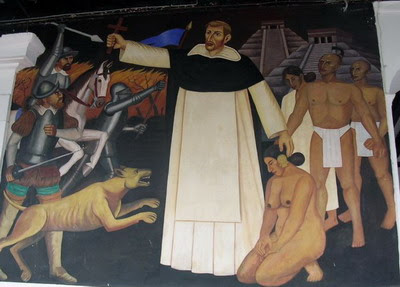 Motivated by the GOSPEL, Bartolome' de Las Casas spent 60 years of his life fighting for the rights of native Americans, resulting in him being considered one of the first advocates for universal human rights. 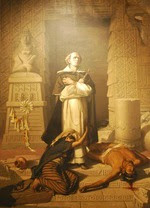 Similar to priests today who deny communion to pro-abortion Catholic politicians, Las Cases declared in his tract "Confesionario" that any Spaniard who refused to release his Indians would be denied forgiveness of sins.

Las Casas wrote "A brief report on the Destruction of the Indians" and "Apologetica historia de las Indias." 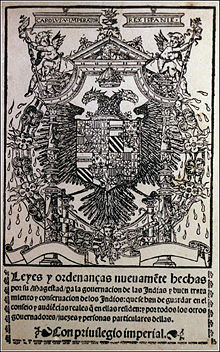 When Las Casas' writings were translated and spread around Europe, an outrage arose pressuring the Spanish monarch to issue Leyes Nuevas (New Laws) which ended slavery, and thus liberated thousands of indigenous Indians. 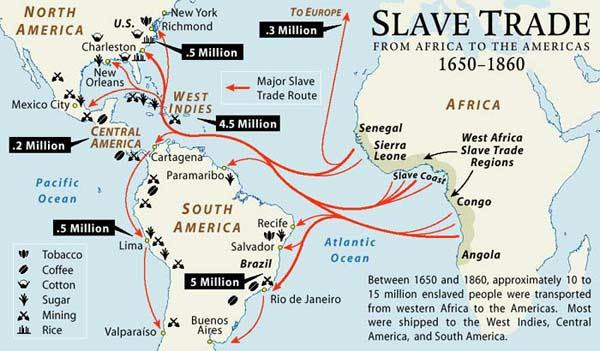 Unfortunately, once enslavement of native Americans was outlawed, plantation owners motivated by GREED replaced them with slaves from Africa. 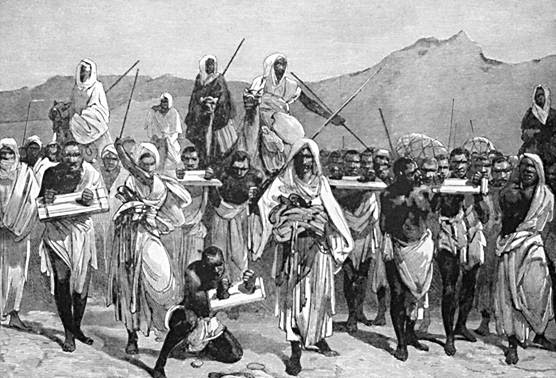 African slaves were purchased from Arab Muslim slave traders, who, in the 1,400 years of Islam are credited with enslaving an estimated 180 million Africans. 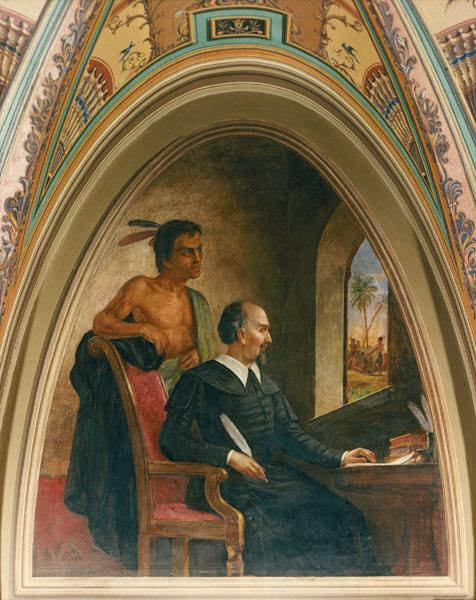 Bartolome' de Las Casas died JULY 17, 1566.
Motivated by the GOSPEL, he stated:
"The main goal of divine Providence in the discovery of these tribes ... is ... the conversion and well-being of souls, and to this goal everything temporal must necessarily be directed."
--
American Minute is a registered trademark of William J. Federer. Permission is granted to forward, reprint, or duplicate, with acknowledgment. (wjfederer@gmail.com 314-502-8924)
Fair Use Disclaimer (17 U.S. Code § 107): The above work is provided for not-for-profit educational purposes, free of charge, add free, and noncommercial. All images, text, excerpts and quotations included therein are for the purposes of teaching, scholarship, research, criticism, comment, and news reporting.