Helen Keller was born June 27, 1880.
At the age of two she suffered an illness that left her blind and deaf. 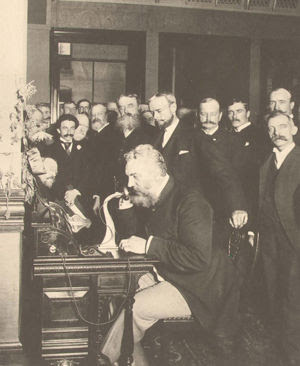 Her parents took her to Dr. Alexander Graham Bell who recommended the Perkins Institute for the Blind in Boston.
It was there, at age of 7, that Helen Keller was taught by Anne Sullivan through the sense of touch. 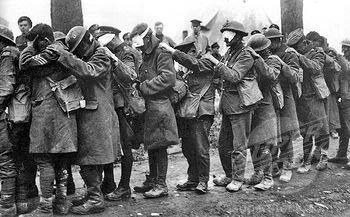 Helen became concerned about all the blind, especially those blinded in World War I or by poor working conditions.
Though naive in her political views, she received numerous international honors for her efforts to help the blind. 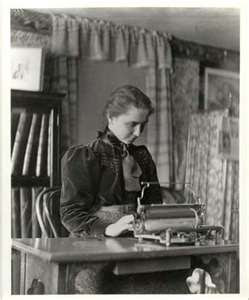 Helen Keller learned to type on a Braille typewriter and wrote many books between 1903 and 1941, including:

Helen Keller stated:
"I thank God for my handicaps, for, through them, I have found myself, my work, and my God." 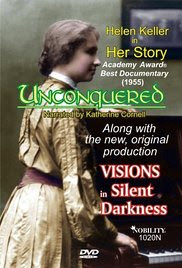 In the film documentary of her life, The Unconquered, Helen Keller responded to the question, "Can you see the world?":
"I can see, and that is why I can be so happy, in what you call the dark, but which to me is golden.
I can see a God-made world, not a man-made world." 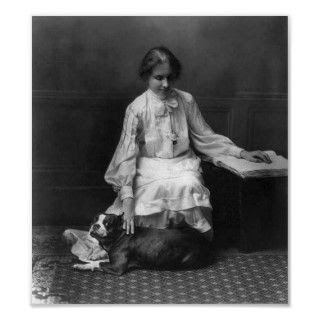 On June 26, 1955, regarding reading the Bible, Helen Keller stated:
"It gives me a deep comforting sense that 'things seen are temporal and things unseen are eternal.'" 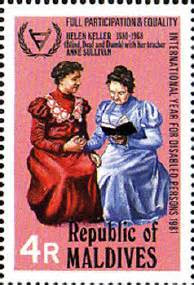 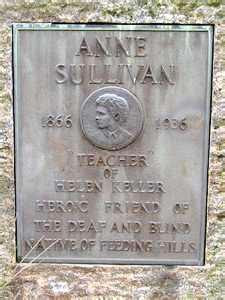 The Jewish attitude of defending the handicapped is in Leviticus 19:14:
"Thou shalt not curse the deaf, nor put a stumblingblock before the blind, but shalt fear thy God: I am the LORD,"
and
Deuteronomy 27:18 "Cursed be he that maketh the blind to wander out of the way. And all the people shall say, Amen." 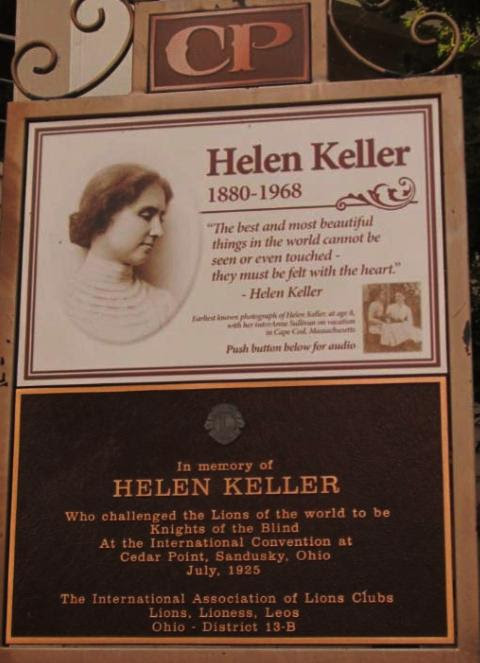 Helen Keller stated:
"Just as all things upon earth represent and image forth all the realities of another world, so the Bible is one mighty representative of the whole spiritual life of humanity." 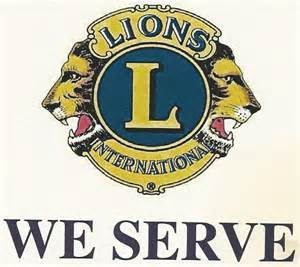 Helen Keller addressed the LIONS Clubs International Foundation Convention in Cedar Point, Ohio, in 1925 on behalf of the American Foundation for the Blind:
"Dear Lions and Ladies:
I suppose you have heard the legend that represents opportunity as a capricious lady, who knocks at every door but once, and if the door isn't opened quickly, she passes on, never to return.
And that is as it should be. Lovely, desirable ladies won't wait. You have to go out and grab 'em.
I am your opportunity. I am knocking at your door. I want to be adopted ...
The American Foundation for the Blind ... grew out of the imperative needs of the blind ...
Its object is to make the lives of the blind more worthwhile everywhere by increasing their economic value and giving them the joy of normal activity ..."

Helen Keller continued:
"Try to imagine how you would feel if you were suddenly stricken blind today.
Picture yourself stumbling and groping at noonday as in the night; your work, your independence, gone.In that dark world wouldn't you be glad if a friend took you by the hand and said,
'Come with me and I will teach you how to do some of the things you used to do when you could see?' 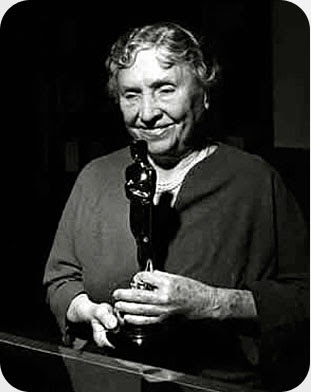 ... That is just the kind of friend the American Foundation is going to be to all the blind in this country if seeing people will give it the support it must have.
You have heard how through a little word dropped from the fingers of another, a ray of light from another soul touched the darkness of my mind and I found myself, found the world, found God.
It is because my teacher learned about me and broke through the dark, silent imprisonment which held me that I am able to work for myself and for others ..." 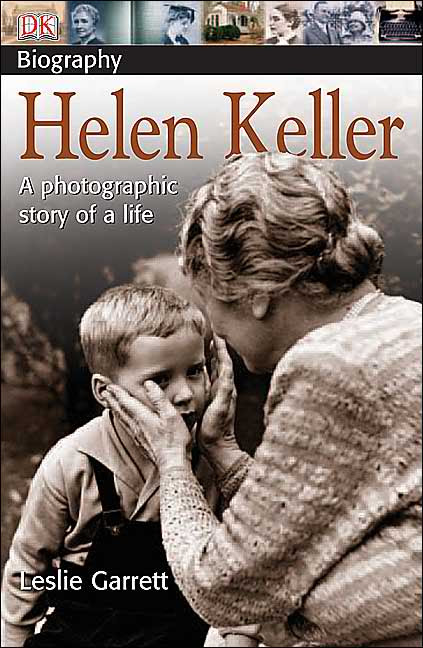 She concluded:
"It is the caring we want more than money.
The gift without the sympathy and interest of the giver is empty.
If you care, if we can make the people of this great country care, the blind will indeed triumph over blindness. 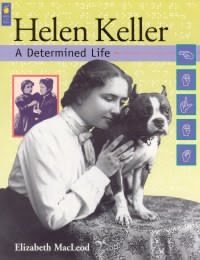 ... The opportunity I bring to you, Lions, is this:
To foster and sponsor the work of the American Foundation for the Blind.
Will you not help me hasten the day when there shall be no preventable blindness; no little deaf, blind child untaught; no blind man or woman unaided?
I appeal to you Lions, you who have your sight, your hearing, you who are strong and brave and kind. 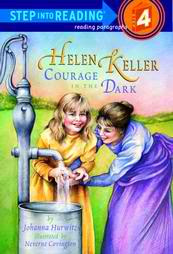 ... Will you not constitute yourselves Knights of the Blind in this crusade against darkness? I thank you." 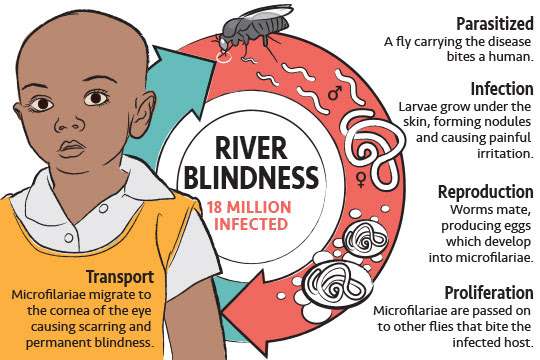 The LIONS adopted the mission for the detection of vision problems in children, provision of glasses for the needy, and many other such projects, such as an initiative to eliminate river blindness in Africa. In Nashville Tennessee the Vanderbilt Eye Center has been funded by large donations from LIONS.

On February 5, 1955, at the age of 74, Helen Keller typed a message on a conventional typewriter during an interview with newsmen just prior to her 40,000 mile world-wide journey, much of which was by airplane:
"It's wonderful to climb the liquid mountains of the sky. Behind me and before me is God and I have no fears."

On June 26, 1955, the day before her 75th birthday, Helen Keller stated:
"Self-pity is our worst enemy and if we yield to it, we can never do anything wise in the world." 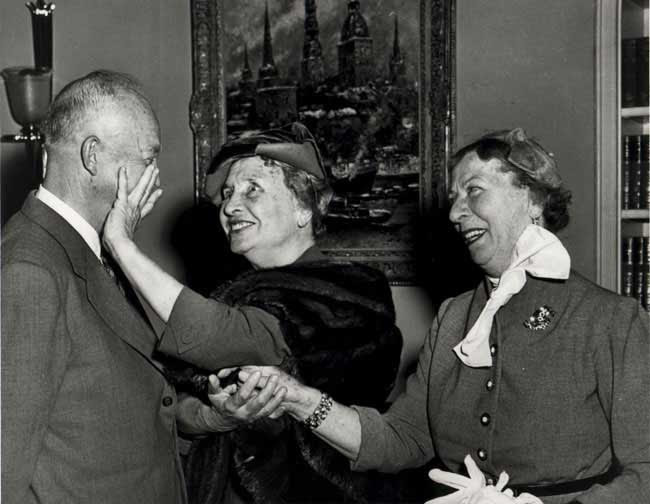 Helen Keller was introduced to President Grover Cleveland at age 7.
She received letters from eight U.S. Presidents -- from Theodore Roosevelt in 1903 to Lyndon B. Johnson in 1965. 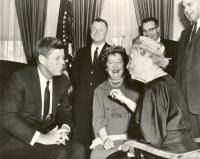 She met President Eisenhower in 1953 and President Kennedy in 1961.
She received the French Legion of Honor and the U.S. Presidential Medal of Freedom. 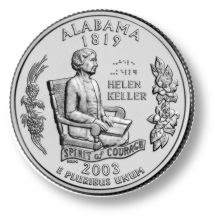 On March 17, 2003, the U.S. Mint issued a quarter coin representing the State of Alabama which honored Helen Keller. 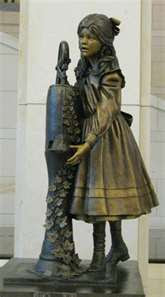 A statue of Helen Keller as a young girl, learning the sense of touch at a water pump is in the U.S. Capitol from the State of Alabama. 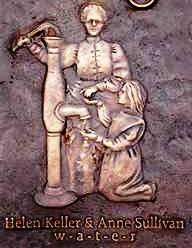 Helen Keller concluded:
"Four things to learn in life:
To think clearly without hurry or confusion;
To love everybody sincerely;
To act in everything with the highest motives;
To trust God unhesitatingly."
--
American Minute is a registered trademark of William J. Federer. Permission is granted to forward, reprint, or duplicate, with acknowledgment. (wjfederer@gmail.com 314-502-8924)
Fair Use Disclaimer (17 U.S. Code § 107): The above work is provided for not-for-profit educational purposes, free of charge, add free, and noncommercial. All images, text, excerpts and quotations included therein are for the purposes of teaching, scholarship, research, criticism, comment, and news reporting.