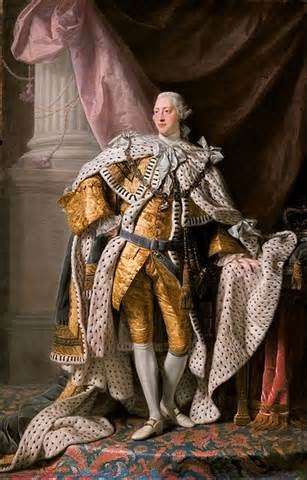 The Declaration of Independence states:
"... But when a long train of abuses and usurpations ... to reduce them under absolute Despotism, it is their right, it is their duty, to throw off such Government, and to provide new Guards for their future security."

The Declaration listed 27 "abuses and usurpations" by King George III. Among the grievances against the King are:
"He has obstructed the administration of justice ..."
"He has made judges dependent on his will alone ..."
"He has erected a multitude of new offices,
and sent hither swarms of officers to harass our people ..." 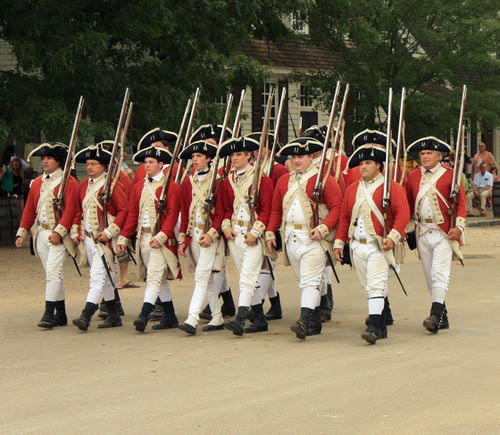 "He has kept among us, in times of peace, standing armies ... independent of and superior to the civil power ..."
"He has combined ... to subject us to a jurisdiction foreign to our constitution ..."
"Giving his assent to their acts of pretended legislation ..." 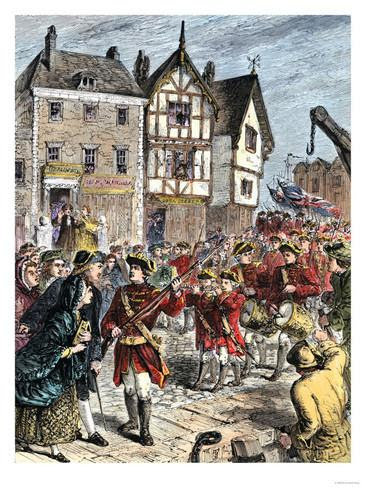 "For quartering large bodies of armed troops among us ..."
"For cutting off our trade ..."
"For imposing taxes on us without our consent ..." 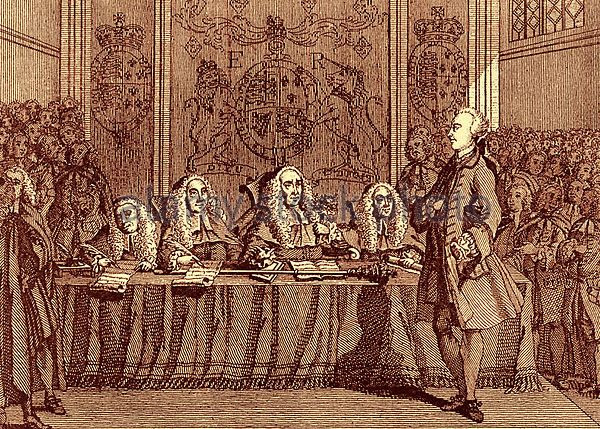 "For depriving us in many cases, of the benefits of trial by jury ..."
"Establishing therein an arbitrary government ... introducing the same absolute rule into these colonies ..."
"For ... altering fundamentally the forms of our governments ..."
"Declaring us out of his protection and waging war against us ... 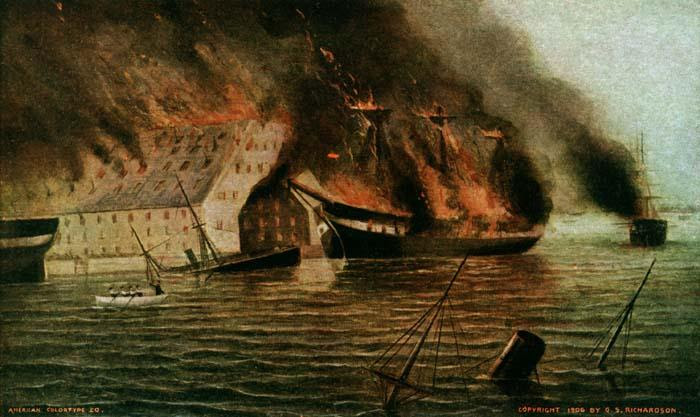 "He has plundered our seas, ravaged our coasts, burnt our towns, and destroyed the lives of our people ..." 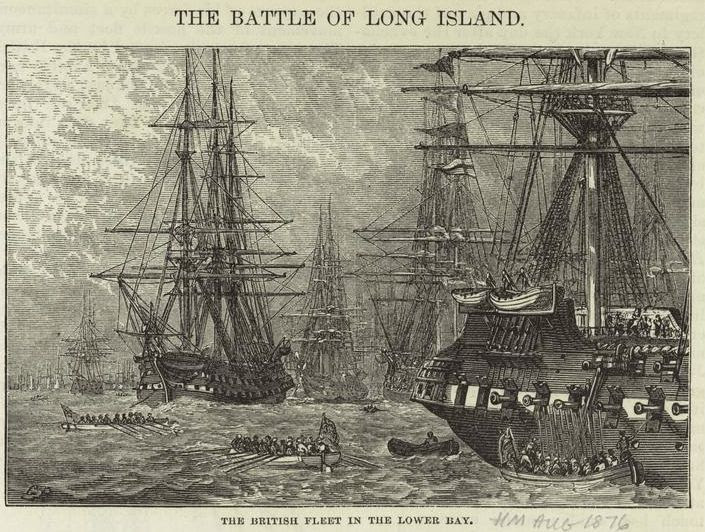 "He is at this time transporting large Armies of foreign Mercenaries to complete the works of death, desolation, and tyranny, already begun with circumstances of Cruelty & Perfidy scarcely paralleled in the most barbarous ages, and totally unworthy the Head of a civilized nation ..."
"He has constrained our fellow Citizens taken Captive on the high Seas to bear Arms against their Country, to become the executioners of their friends and Brethren ..." 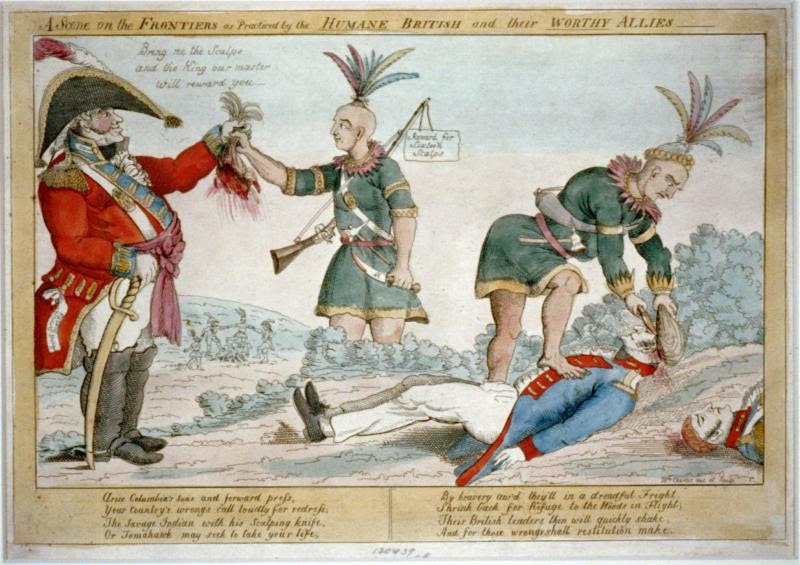 "He has excited domestic insurrections amongst us, and has endeavored to bring on the inhabitants of our frontiers, the merciless Indian Savages whose known rule of warfare, is an undistinguished destruction of all ages, sexes and conditions."
"In every stage of these oppressions we have petitioned for redress ..." 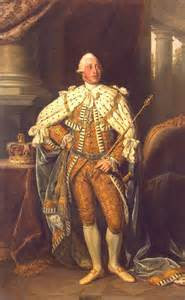 The Declaration concluded:
"Our repeated petitions have been answered only by repeated injury.
A prince whose character is thus marked by every act which may define a tyrant, is unfit to be the ruler of a free people." 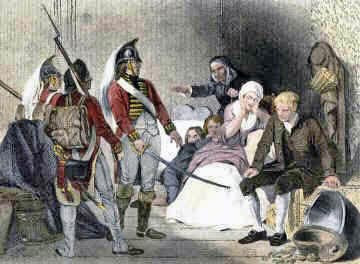 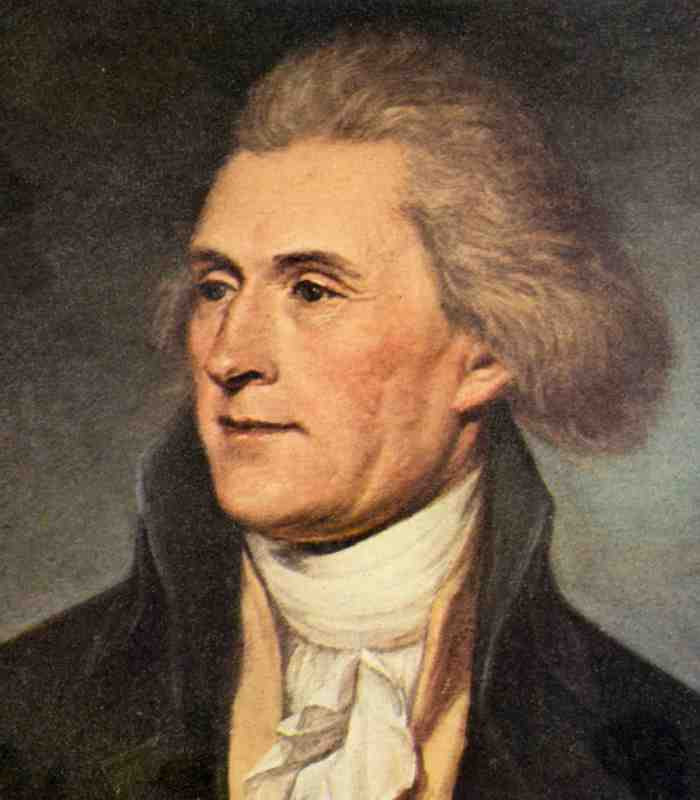 Jefferson stated, November 29, 1775:
"By the God that made me, I will cease to exist before I yield to a connection on such terms as the British Parliament propose; and in this, I think I speak the sentiments of America." 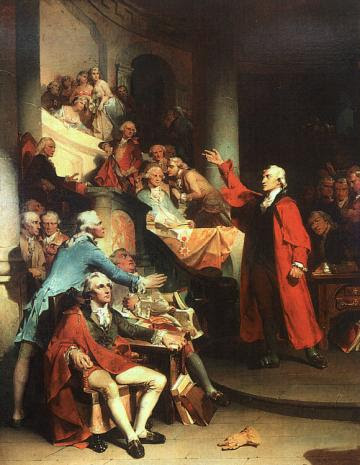 On MARCH 23, 1775, Patrick Henry spoke to the Second Virginia Convention, which was meeting in Richmond's St. John's Church due to British hostilities:
"I consider it as nothing less than a question of freedom or slavery ...
I know of no way of judging of the future but by the past.
And judging by the past, I wish to know what there has been in the conduct of the British ministry ... to justify those hopes with which gentlemen have been pleased to solace themselves ...
Suffer not yourselves to be betrayed with a kiss ... 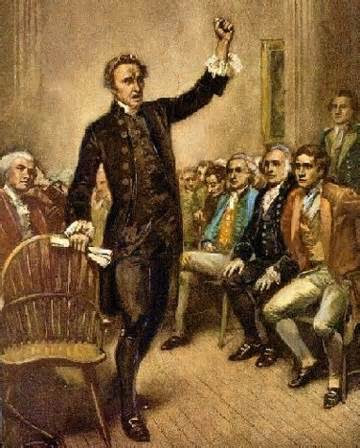 ... Let us not deceive ourselves, sir.
These are the implements of war and subjugation; the last arguments to which kings resort.
I ask gentlemen, sir, what means this martial array, if its purpose be not to force us to submission?
Has Great Britain any enemy, in this quarter of the world, to call for all this accumulation of navies and armies?
No, sir, she has none. They are meant for us: they can be meant for no other.
They are sent over to bind and rivet upon us those chains which the British ministry have been so long forging ... 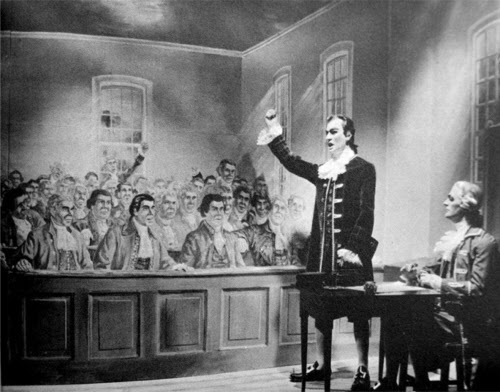 ... Let us not, I beseech you, sir, deceive ourselves.
Sir, we have done everything that could be done to avert the storm which is now coming on.
We have petitioned; we have remonstrated; we have supplicated; we have prostrated ourselves before the throne ...

... Our petitions have been slighted; our remonstrances have produced additional violence and insult; our supplications have been disregarded; and we have been spurned, with contempt, from the foot of the throne ..." 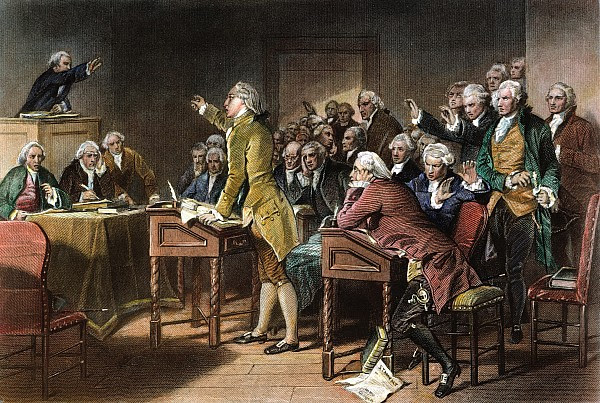 Henry continued:
"There is a just God who presides over the destines of nations ... who will raise up friends to fight our battle for us.
The battle, sir, is not to the strong alone; it is to the vigilant, the active, the brave ... 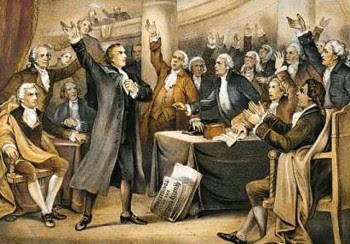 ... Is life so dear, or peace so sweet, as to be purchased at the price of chains and slavery?
Forbid it, Almighty God!
I know not what course others may take; but as for me, give me liberty or give me death!" 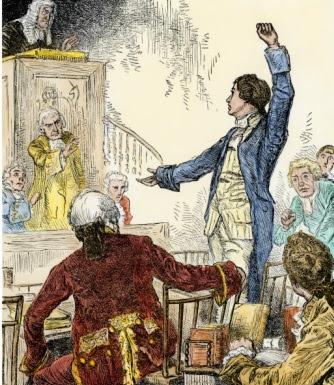 After he ended his speech, there was stunned silence for several minutes. 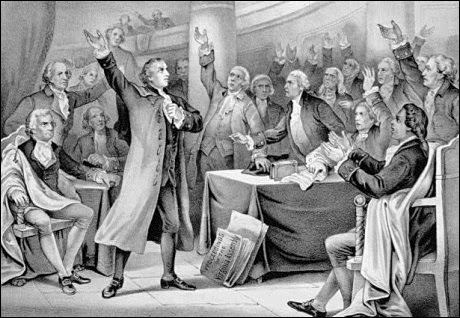 Virginia delegate George Mason stated of Patrick Henry's speech:
"He is by far the most powerful speaker I ever heard.
Every word he says not only engages but commands the attention, and your passions are no longer your own when he addresses them ... 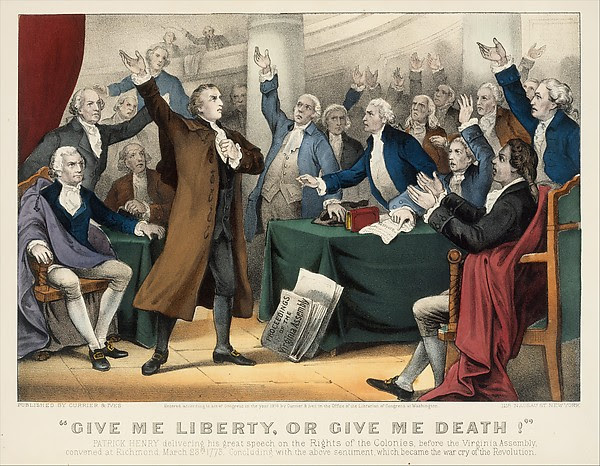 ... He is, in my opinion, the first man upon this continent, as well in abilities as public virtues ...
Had he lived in Rome about the time of the first Punic War ... Mr. Henry's talents must have put him at the head of that glorious commonwealth." 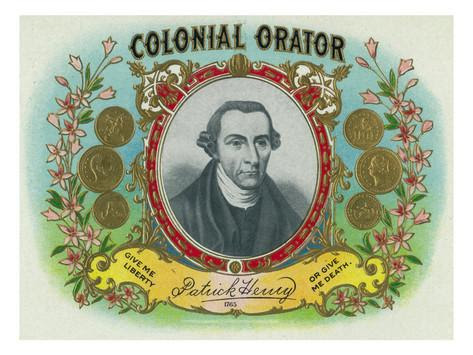 After Patrick Henry's speech, Virginia's Provincial Congress passed a resolution for self-defense:
"Resolved, that a well regulated militia composed of gentlemen and yeomen is the natural strength and only security of a free government;
that such a militia in this colony would forever render it unnecessary for the mother country to keep among us ... any standing army of mercenary forces, always subversive of the quiet, and dangerous to the liberties of the people." 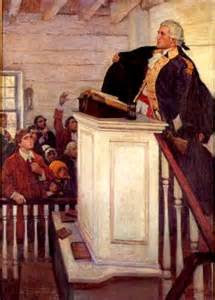 Present at Patrick Henry's speech was 29 year old Lutheran pastor, John Peter Muhlenberg, who had been elected to the Virginia House of Burgesses.
Inspired, he approached George Washington, who made him a colonel and told him to raise a regiment of troops.

Muhlenberg recruited 300 men from his church and surrounding churches to form the 8th Virginia Regiment.
Muhlenberg's statue is in the U.S. Capitol's Statuary Hall. 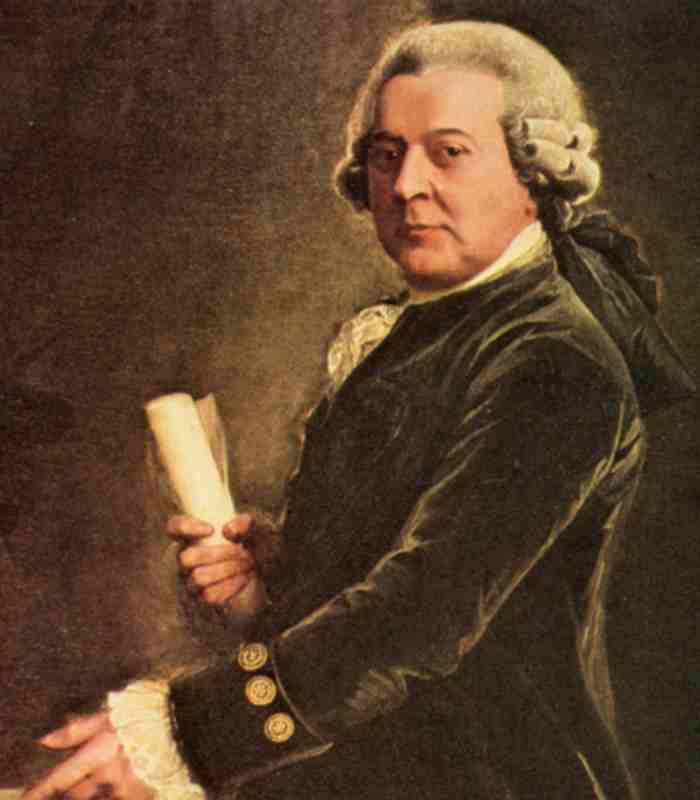 John Adams voted for independence, then wrote July 2, 1776:
"I am apt to believe that day will be celebrated, by succeeding Generations, as the great anniversary Festival.
It ought to be commemorated, as the Day of Deliverance by solemn Acts of Devotion to God Almighty." 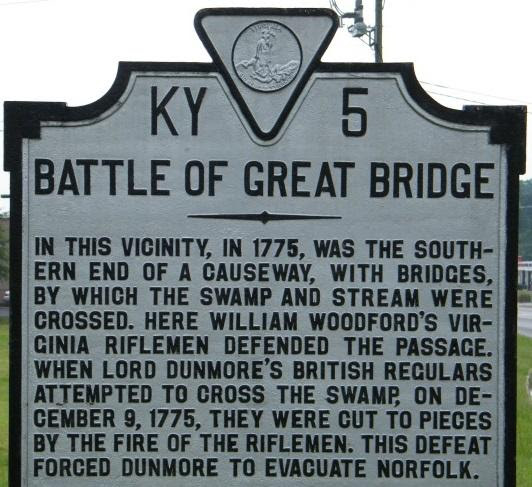 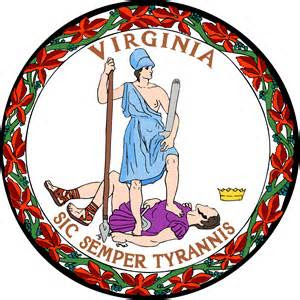 Virginia's State Seal has a female figure personifying Virtus, the Roman Republic's attribute of virtue, with her foot victoriously crushing the neck of a tyrant.
The Latin motto on the Seal, Sic semper tyrannis, means "Thus always to tyrants." 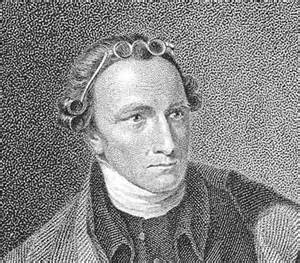 In 1788, Virginia was holding its convention to ratify the U.S. Constitution.
After experiencing the abuse of power by King George III, Patrick Henry took the views of the anti-federalists, being suspicious that in the future the federal government would grow uncontrollably and usurp power.
Through ebb and flow of history, America has experienced abuse of power, followed by periods of reprieve, but future elections always hold potential dangers.
Patrick Henry warned June 5, 1788:
"My great objection to this Government is, that it does not leave us the means of defending our rights, or of waging war against tyrants ...
There is to be a great and mighty president, with very extensive powers -- the powers of a king ... 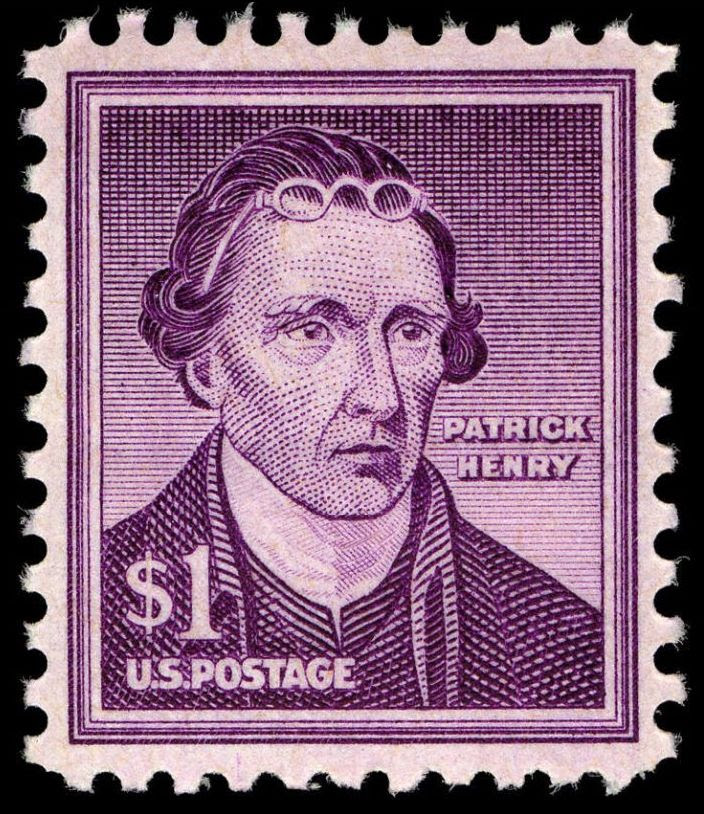 ... This Constitution ... squints towards monarchy ... Your president may easily become king ...
If your American chief be a man of ambition and abilities, how easy is it for him to render himself absolute!
The army is in his hands ... and it will be ... with him to seize the first auspicious moment to accomplish his design ..." 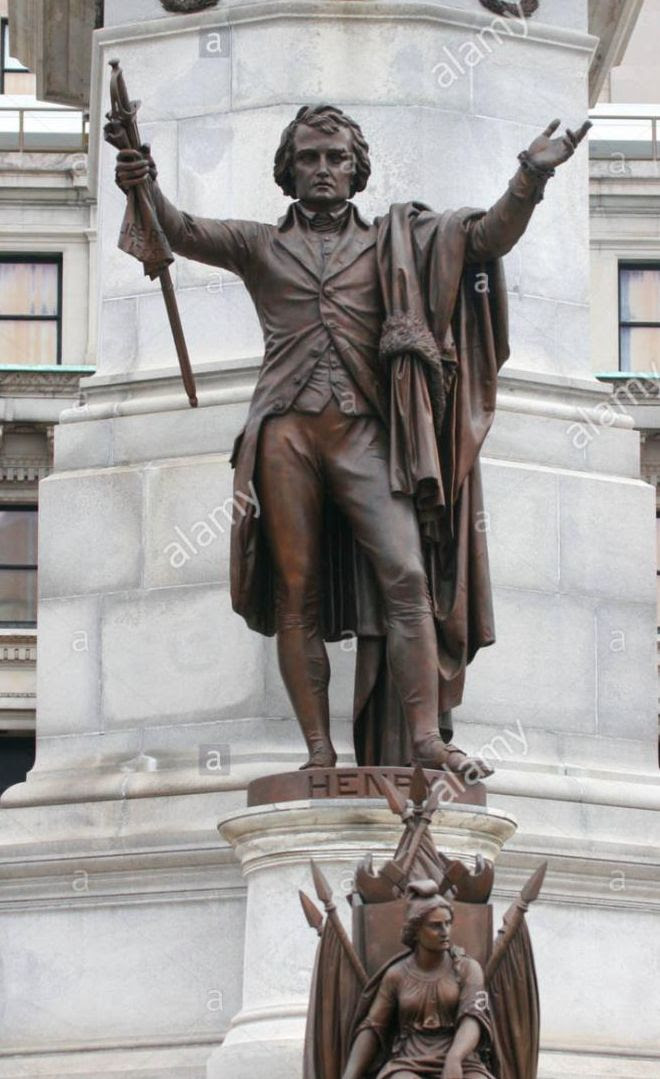 Patrick Henry concluded his warning of despotism:
"The president ... can prescribe the terms on which he shall reign master, so far that it will puzzle any American ever to get his neck from under the galling yoke ...
Where is the existing force to punish him? Can he not, at the head of his army, beat down every opposition?
Away with your president! we shall have a king: the army will salute him monarch ... What will then become of you and your rights?
Will not absolute despotism ensue? ... 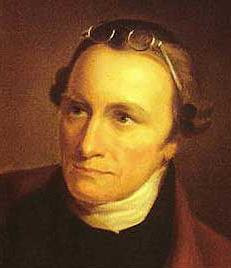 ... My great objection to the Constitution ... that the preservation of our liberty depends on the single chance of men being virtuous enough to make laws to punish themselves."
--
American Minute posts by American Priorities 501(c)3
American Minute is a registered trademark of William J. Federer. Permission is granted to forward, reprint, or duplicate, with acknowledgment.
Fair Use Disclaimer (17 U.S. Code § 107): The above work is provided for not-for-profit educational purposes, free of charge, add free, and noncommercial. All images, text, excerpts and quotations included therein are for the purposes of teaching, scholarship, research, criticism, comment, and news reporting.