On the frigid night of FEBRUARY 3, 1943, the overcrowded Allied ship U.S.A.T. Dorchester, carrying 902 servicemen, plowed through the dark, freezing waters near Greenland. 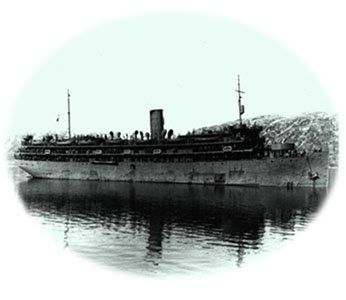 At 1:00am, a Nazi submarine fired a torpedo into the transport's flank, killing many in the explosion and trapping others below deck.
It sank in 27 minutes. 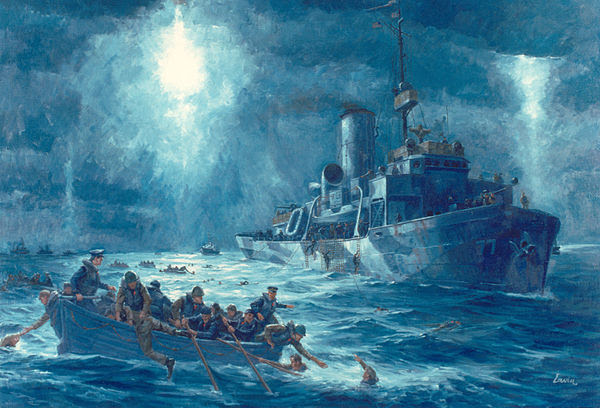 The two escort ships, Coast Guard cutters Comanche and Escanaba, were able to rescue only 231 survivors. 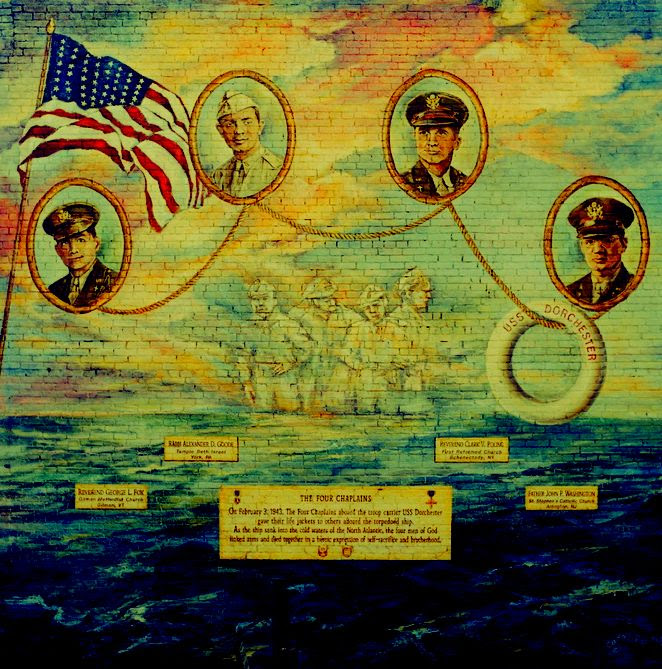 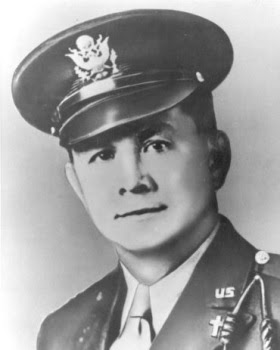 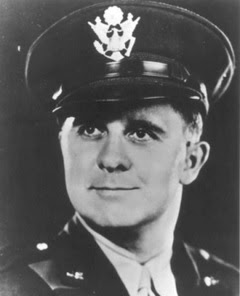 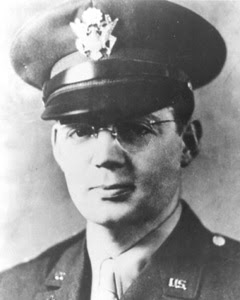 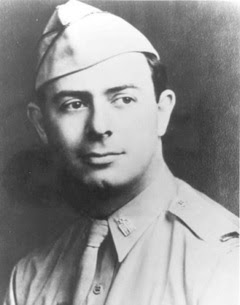 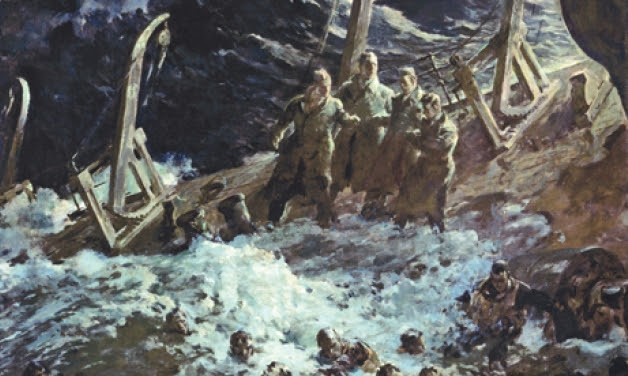 When there were no more life jackets, the four chaplains ripped off their own and put them on four young men. 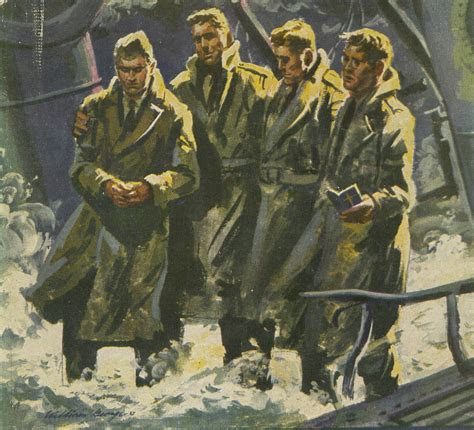 As the ship went down, survivors floating in rafts could see the four chaplains linking arms and bracing themselves on the slanting deck. 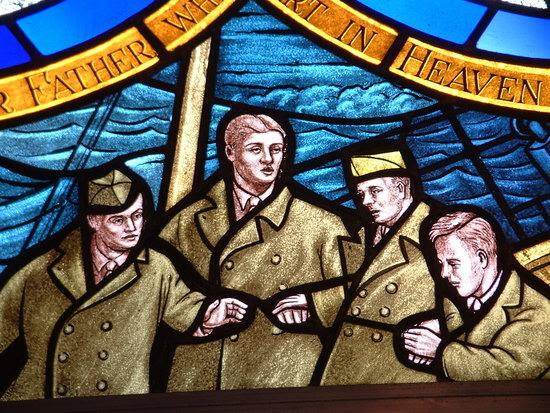 They bowed their heads in prayer as they sank to their icy deaths.

Survivor Grady Clark wrote:
"As I swam away from the ship, I looked back.
The flares had lighted everything. The bow came up high and she slid under.
The last thing I saw, the Four Chaplains were up there praying for the safety of the men. They had done everything they could. I did not see them again.
They themselves did not have a chance without their life jackets." 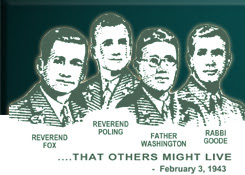 President Franklin D. Roosevelt acknowledged Protestants, Catholics, and Jews working together for liberty in his address at Madison Square Garden, October 28, 1940:
"Your government is working ... with representatives of Catholic, Protestant, and Jewish faiths. Without these three, all three of them ... things would not be as ... easy." 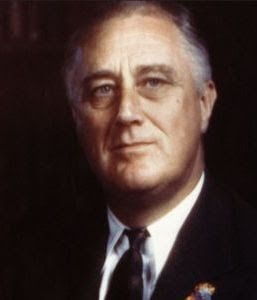 FDR stated January 31, 1938:
"There has been definite progress towards a spiritual reawakening ...
I receive evidences of this from all our Protestant Churches; I get it from Catholic priests and from Jewish rabbis as well." 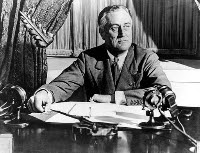 FDR stated December 6, 1933:
"Government guarantees to the churches -- Gentile and Jewish -- the right to worship God in their own way." 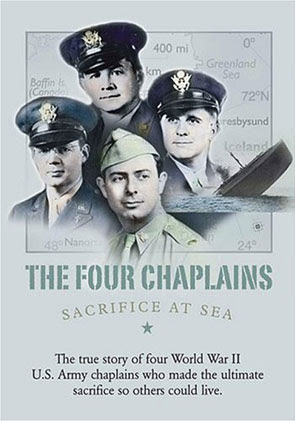 In a Radio Address, November 4, 1940, FDR stated:
"Democracy is the birthright of every citizen, the white and the colored; the Protestant, the Catholic, the Jew." 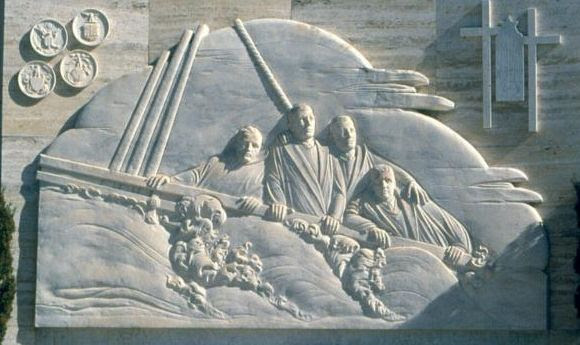 On February 3, 1951, President Harry S. Truman dedicated the Chapel of the Four Chaplains, currently located at the Philadelphia Naval Shipyard.
Truman said:
"This interfaith shrine ... will stand through long generations to teach Americans that as men can die heroically as brothers so should they live together in mutual faith and goodwill." 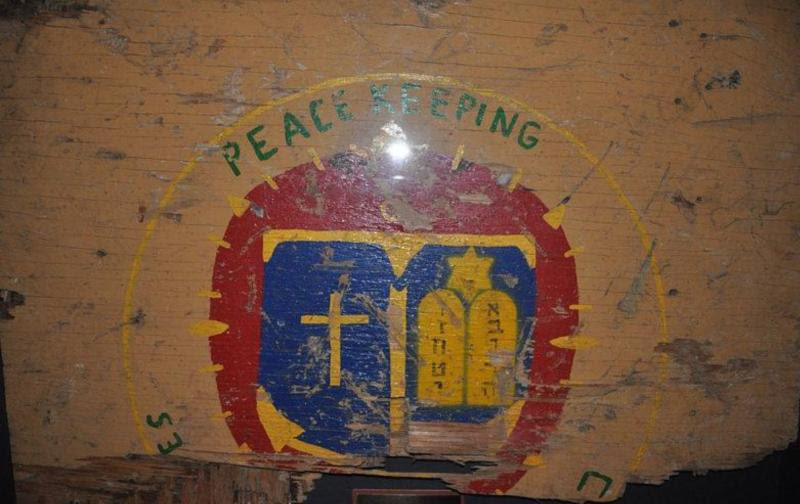 In 1984, the Chapel of the Four Chaplains gave an award recognizing the military chaplain team, made up of a Protestant minister, a Catholic priest, and a Jewish rabbi, who were present at the 1983 Beirut Bombing where fundamental Muslim terrorists blew up the U.S. Marine barracks, killing 241 U.S. Marines. 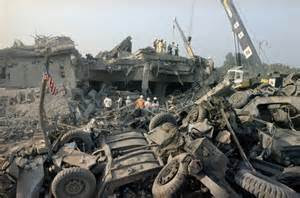 President Ronald Reagan memorialized them in a speech at the Baptist Annual Convention, April 13, 1984:
"On that October day when a terrorist truck bomb took the lives of 241 marines, soldiers, and sailors at the airport in Beirut, one of the first to reach the tragic scene was a chaplain, the chaplain of our 6th Fleet, Rabbi Arnold E. Resnicoff ...
He said, 'Screams of those injured or trapped were barely audible at first, as our minds struggled to grapple with the reality before us - a massive four-story building, reduced to a pile of rubble; dust mixing with smoke and fire, obscuring our view of the little that was left ... 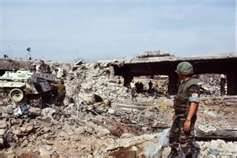 ... Trying to pull and carry those whose injuries appeared less dangerous in an immediate sense than the approaching fire or the smothering smoke - my kippa was lost. (That is the little headgear that is worn by rabbis.)
The last I remember it, I'd used it to mop someone's brow. Father Pucciarelli, the Catholic chaplain, cut a circle out of his cap - a piece of camouflaged cloth which would become my temporary head-covering. Somehow he wanted those marines to know not just that we were chaplains, but that he was a Christian and that I was Jewish ..." Reagan continued quoting Chaplain Rabbi Resnicoff:
"The words from the prophet Malachi kept recurring to me - words he'd uttered some 2,500 years ago as he had looked around at fighting and cruelty and pain. 'Have we not all one Father?' he had asked. 'Has not one God created us all?' ...
To understand the role of the chaplain - Jewish, Catholic, or Protestant - is to understand that we try to remind others, and perhaps ourselves as well, to cling to our humanity even in the worst of times ...
We bring with us the truth that faith not only reminds us of the holy in Heaven, but also of the holiness we can create here on Earth ...
We have within us the power to reflect as God's creatures the highest values of our Creator. As God is forgiving and - merciful, so can we be.'" 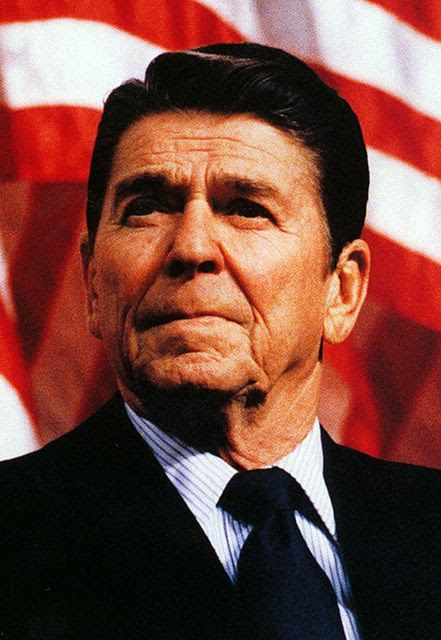 Reagan stated January 31, 1983:
“Let us come together, Christians and Jews, let us pray together ...
﻿All of us, as Protestants, Catholics, and Jews, have a special responsibility to remember our fellow believers who are being persecuted in other lands.
We're all children of Abraham. We're children of the same God." 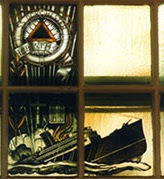 On February 7, 1954, President Dwight Eisenhower spoke from the White House for the American Legion 'Back-to-God' Program:
"And we remember that, only a decade ago, aboard the transport Dorchester, four chaplains of four faiths together willingly sacrificed their lives so that four others might live ..."

Eisenhower continued:
"Today as then, there is need for positive acts of renewed recognition that faith is our surest strength, our greatest resource.
This 'Back to God' movement is such a positive act ...
Whatever our individual church, whatever our personal creed, our common faith in God is a common bond among us ...
Together we thank 'the Power that has made and preserved us a nation.'
By the millions, we speak prayers, we sing hymns-and no matter what their words may be, their spirit is the same - 'In God is Our Trust.'" 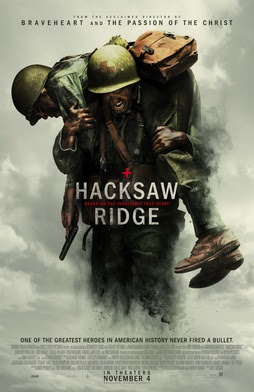 Another inspiring story of a Christian risking his life to save soldiers was combat medic Desmond Doss, as portrayed in the award-winning film Hacksaw Ridge (2016).
Doss saved 75 soldiers during the Battle of Okinawa, for which he was awarded the Medal of Honor. 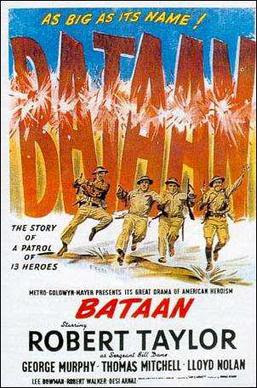 Yet another inspiring story was that of Chaplain William Thomas Cummings, who served with the U.S. Army in the Philippines during World War II.
He was captured by the Imperial Japanese and died when his unmarked prisoner ship was sunk sailing to Japan on January 18, 1945. 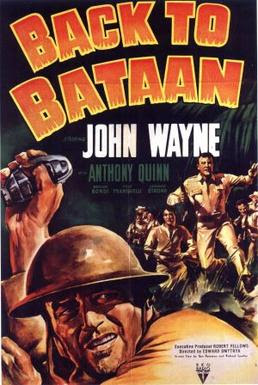 Earlier, while serving with the American troops during the Battle of Bataan, January 7 to April 9, 1942, Chaplain Father Cummings gave a stirring field sermon in which he declared:
"There are no atheists in the foxholes." 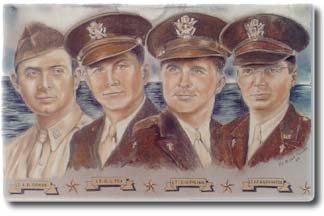 Eisenhower repeated these words in his address February 7, 1954:
"As a former soldier, I am delighted that our veterans are sponsoring a movement to increase our awareness of God in our daily lives. In battle, they learned a great truth - that there are no atheists in the foxholes.
They know that in time of test and trial, we instinctively turn to God for new courage and peace of mind. All the history of America bears witness to this truth ...
In the three centuries that separate the Pilgrims of the Mayflower from the chaplains of the Dorchester, America's freedom, her courage, her strength, and her progress have had their foundation in faith."
--
American Minute posts by American Priorities 501(c)3
American Minute is a registered trademark of William J. Federer. Permission is granted to forward, reprint, or duplicate, with acknowledgment.
Fair Use Disclaimer (17 U.S. Code § 107): The above work is provided for not-for-profit educational purposes, free of charge, add free, and noncommercial. All images, text, excerpts and quotations included therein are for the purposes of teaching, scholarship, research, criticism, comment, and news reporting.