The "Father of Chemistry" wanted to evangelize America ... and warned of the end of the world!
Robert Boyle was born JANUARY 25, 1627. 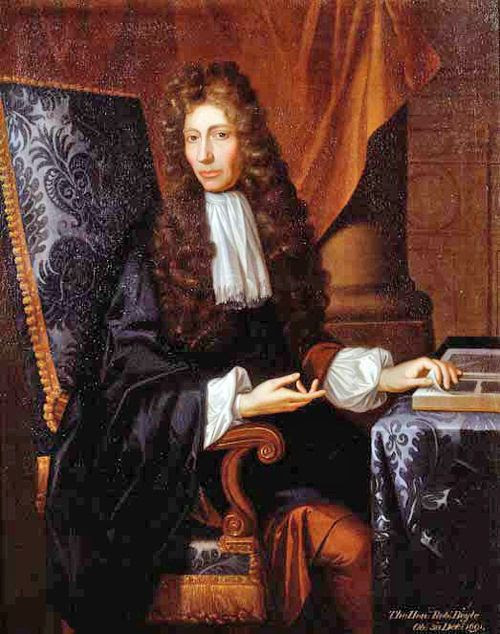 He studied Sir Francis Bacon, René Descartes, and other of his contemporaries of the Scientific Revolution, including: 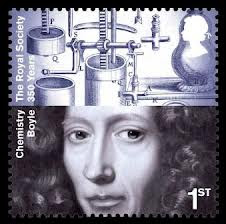 Robert Boyle made contributions in physics and chemistry, especially with his pneumatic experiments using the vacuum pump, putting forward the idea that gases were made of tiny particles. 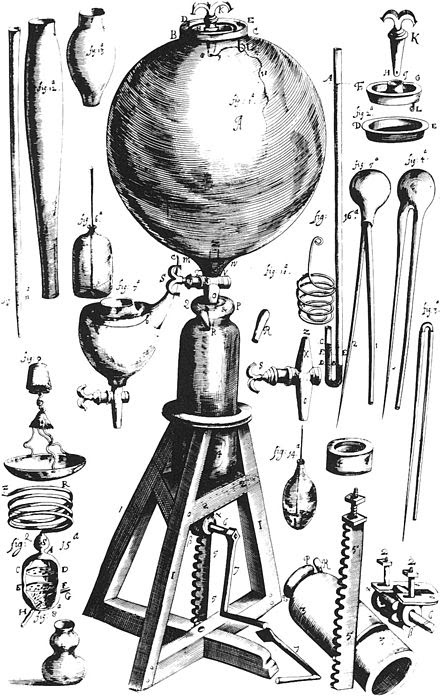 He discovered the basic law of gas dynamics, known as "Boyle's Law," that if the volume of a gas is decreased, the pressure increases proportionally (PV=c). 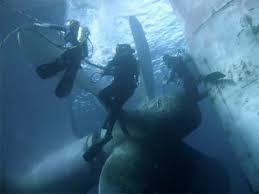 An understanding of Boyle's Law is vital for scuba divers, who must never hold their breath while ascending, for as the external pressure decreases, air volume in their lungs increases, potentially causing lungs to burst like a balloon. 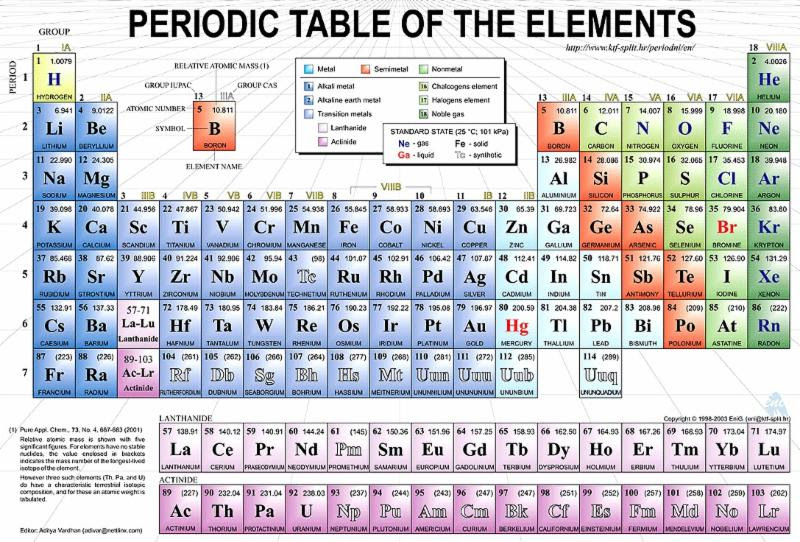 In 1661, Robert Boyle defined the modern idea of an "element" as "a substance that cannot be broken down into a simpler substance by a chemical reaction."
This understanding was necessary for the periodic table of elements to be compiled.
Boyle's definition of "element" was used for three centuries until subatomic particles were discovered. 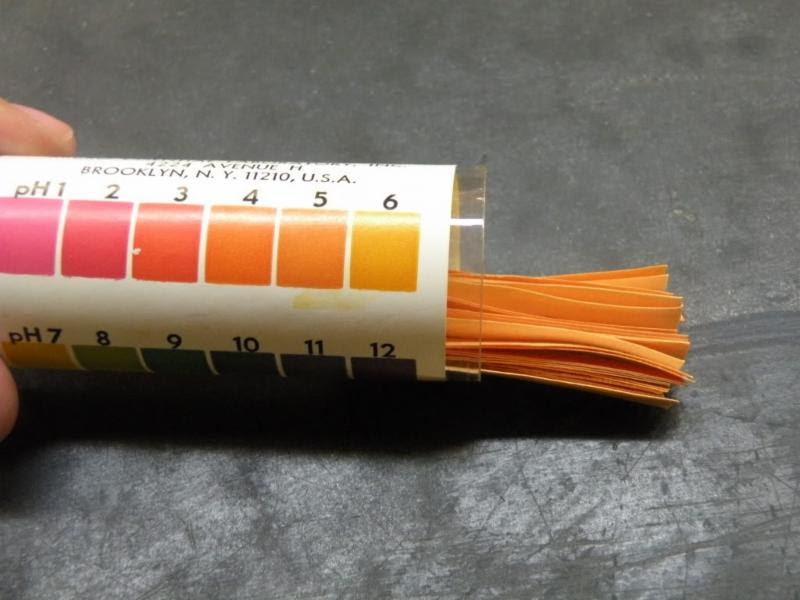 Boyle introduced the litmus test to distinguish acids from bases, and was the first to use the term "chemical analysis." 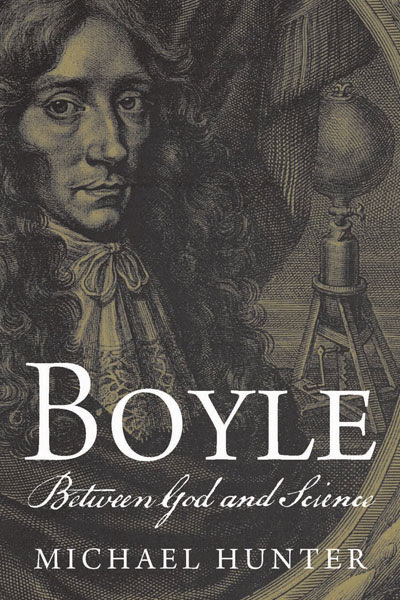 In 1660, Robert Boyle and eleven others formed the Royal Society in London to advance scientific experiments.
While in Geneva, Switzerland, during a frightening thunderstorm, Boyle had a deepening conversion experience. 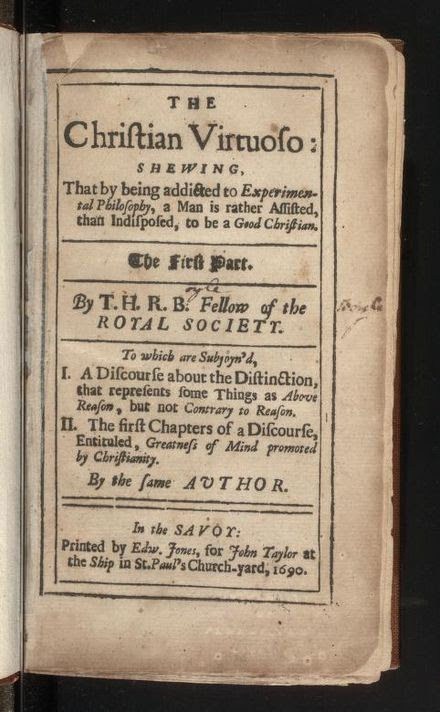 Boyle devoted much effort to defending and propagating the Christian religion, writing the "Boyle Lectures" and numerous books, including: 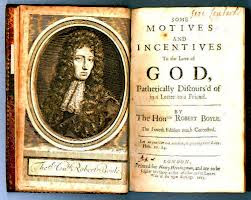 Robert Boyle provided in his Last Will and Testament, dated July 28, 1691:
"Fifty pounds ... for an annual salary so some learned Divine or Preaching Minister ... to preach eight sermons in the year, for proving the Christian Religion against notorious Infidels, viz., Atheists, Theists, Pagans, Jews, and Mahometans,
not descending lower to any controversies that are among Christians themselves ... and encouraging ... any undertaking for Propagating the Christian Religion in foreign parts." 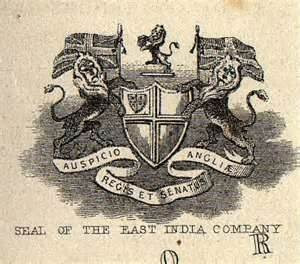 Robert Boyle was a director of the East India Company, and spent large sums supporting missionary societies in the spread of Christianity in Asia. 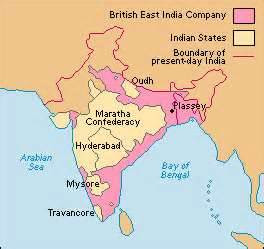 Boyle believed all races, no matter how diverse, came from Adam and Eve.
He funded translations of the Bible to make it available in people's vernacular language, in contrast to the prevailing Latin-only policy.
He funded an Irish edition of the Bible (1680-1685) for commoners, which was thought ill of by English upper class. 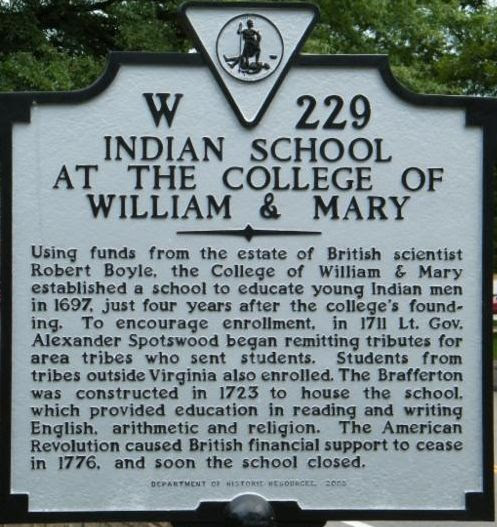 Robert Boyle was concerned about propagating the Gospel to natives in New England and the rest of America, as he wrote in a letter to Mr. Clodius.
He wanted to translate and print the Bible in American Indian languages.
A historical marker, "W 229 Indian School at the College of William & Mary" stated:
"Using funds from the estate of British scientist Robert Boyle, the College of William & Mary established a school to educate young Indian men ... which provided education in reading and writing English, arithmetic and religion." 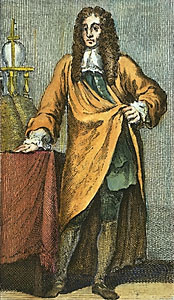 Robert Boyle wrote:
"Our Saviour would love at no less rate than death; and from the super-eminent height of glory, stooped and debased Himself to the sufferance of the extremest of indignities, and sunk himself to the bottom of abjectness, to exalt our condition to the contrary extreme." 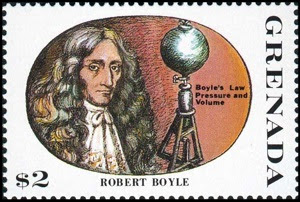 Boyle wrote in Some Considerations Touching the Style of the Holy Scriptures (1661):
"The Books of Scripture ... expound each other; as in the mariner's compass, the needle's extremity, though it seems to point purposely to the north, doth yet at the same time discover both east and west, as distant as they are from it and each other, so do some texts of Scripture guide us to the intelligence of others."

Boyle wrote:
"There are divers truths in the Christian religion, that reason left to itself would never have been able to find out ...
Such as ... free will ... that the world was made in six days, that Christ should be born of a virgin, and that in his person there should be united two such infinitely distant natures as the divine and human;
and that the bodies of good men shall be raised from death and so advantageously changed, that the glorified persons shall be like or equal to, the angels." 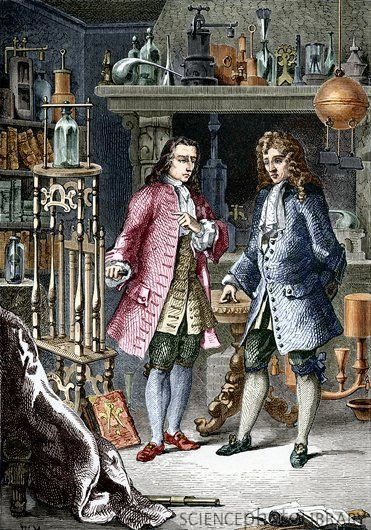 Boyle wrote of the last days and the "sinful world's ruin":
"In Noah's time a deluge of impiety called for a deluge of waters ... and so when (in the last days) the earth shall be replenished with those scoffers mentioned by St Peter, who will walk after their own lusts, and deride the expectation of God's foretold coming to judge and punish the ungodly,
their impiety shall be as well punished as silenced by the unexpected flames ... that shall either destroy or transfigure the world.
For as by the law of Moses the leperous garment which would not be recovered by being washed in water, was to be burnt in the fire, so the world, which the Deluge could not cleanse, a general conflagration must destroy." 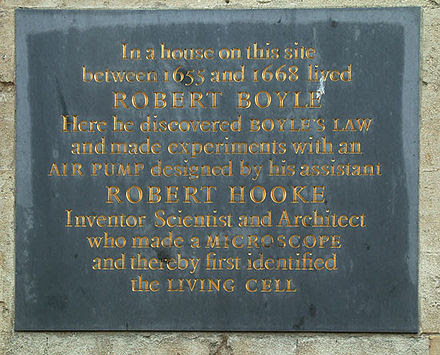 Robert Boyle wrote of the destruction of the world by fire at the end of this age:
"The present course of nature shall not last always, but that one day this world ... shall either be abolished by annihilation, or which seems far more probable, be innovated, and as it were transfigured, and that, by the intervention of that fire, which shall dissolve and destroy the present frame of nature:
so that either way, the present state of things, (as well natural as political) shall have an end." 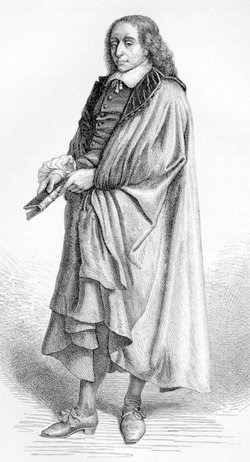 A contemporary of Robert Boyle was was the French physicist, mathematician and philosopher, Blaise Pascal, born June 19, 1623.

Blaise Pascal helped develop the barometer, and pioneered hydrodynamics and fluid mechanics.
He discovered "Pascal's Principle" which is the basis of hydraulics.
He is considered a father of the science of hydrostatics and hydraulic engineering. 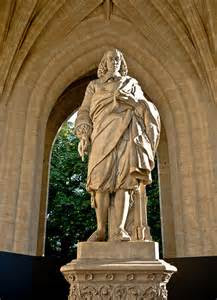 Pascal made invaluable contributions in the areas of probability and differential calculus, with the invention of Pascal's triangle for calculating the coefficients of a binomial expansion. 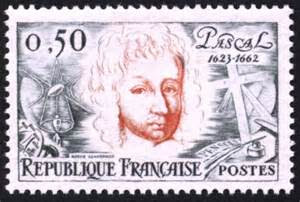 His influential religious works, emphasizing "the reasons of the heart" over dry logic and intellect, were titled Lettres Provinciales, 1656-57, and Pensees Sur La Religion, published posthumously in 1670. 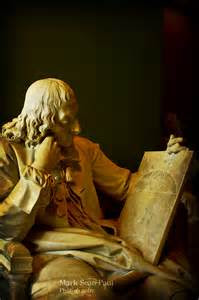 In Pensees, 1670, Pascal wrote:
"Men blaspheme what they don't know."
"People are generally better persuaded by the reasons which they have themselves discovered than by those which have come into the mind of others." 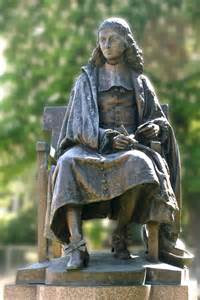 Blaise Pascal was known for "Pascal's Wager," which stated:
"How can anyone lose who chooses to become a Christian?
If, when he dies, there turns out to be no God and his faith was in vain, he has lost nothing -- in fact, he has been happier in life than his non-believing friends.
If, however, there is a God and a heaven and hell, then he has gained heaven and his skeptical friends will have lost everything in hell!" 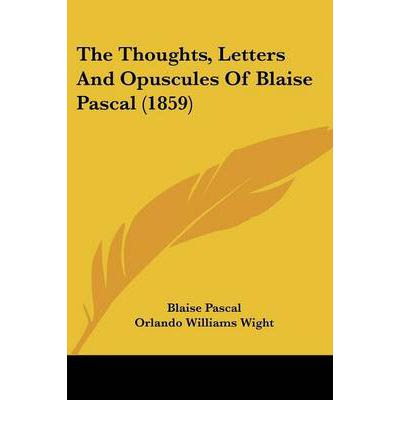 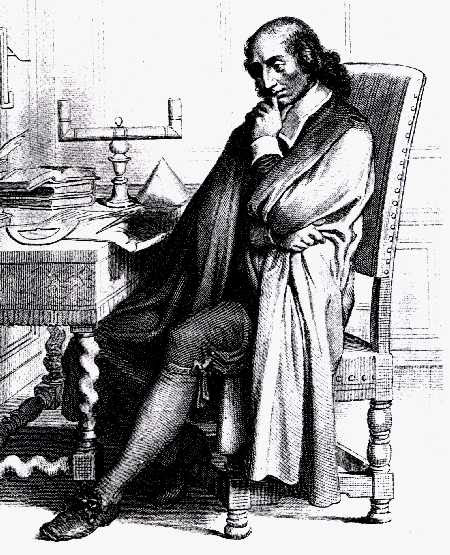 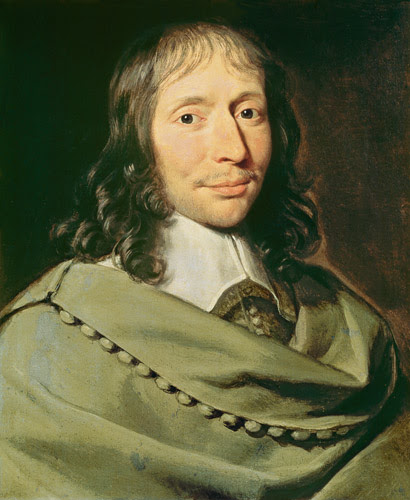 Blaise Pascal continued in Thoughts, Letters and Opuscules:
"We know life, death, only through Jesus Christ. Except by Jesus Christ we know not what life is, what our death is, what God is, what we ourselves are.
Thus, without Scripture, which has only Jesus Christ for its object, we know nothing, and we see not only obscurity and confusion in the nature of God, but in nature herself. 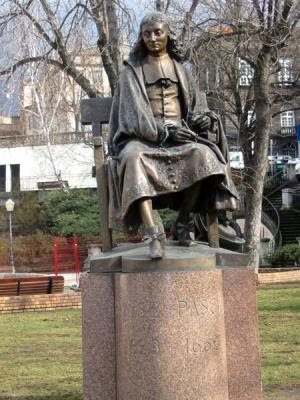 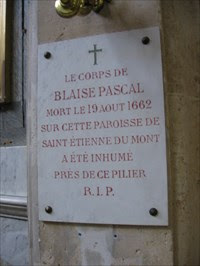 After Pascal's death, August 19, 1662, a note found among his person effects stated:
"'The God of Abraham, the God of Isaac, the God of Jacob,' not of philosophers and scholars."
--
American Minute posts by American Priorities 501(c)3
American Minute is a registered trademark of William J. Federer. Permission is granted to forward, reprint, or duplicate, with acknowledgment.
Fair Use Disclaimer (17 U.S. Code § 107): The above work is provided for not-for-profit educational purposes, free of charge, add free, and noncommercial. All images, text, excerpts and quotations included therein are for the purposes of teaching, scholarship, research, criticism, comment, and news reporting.